#BRNOREGION
/
Novinky
/
Villa Tugendhat – a smarthome of the 20th century

Villa Tugendhat – a smarthome of the 20th century

While looking quite discreet from the street, this legendary villa reveals its secrets only once you enter: the feeling of endless space, breathtaking beauty as well as innovations that, at the time, the world had never seen before…

Villa Tugendhat was designed in 1928 by German architect Ludwig Mies van der Rohe for Mr. and Mrs. Tugendhat. The land as well as the money to build the villa was given to Grete Tugendhat as a dowry from her father, Alfred Löw-Beer, a wealthy textile businessman. This money made the budget literally unlimited, allowing for the use of luxurious and exceptional materials but also the testing of new technologies that had never been used in family houses. 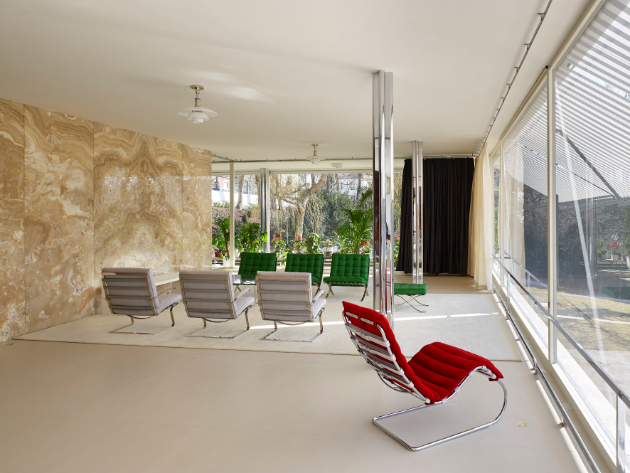 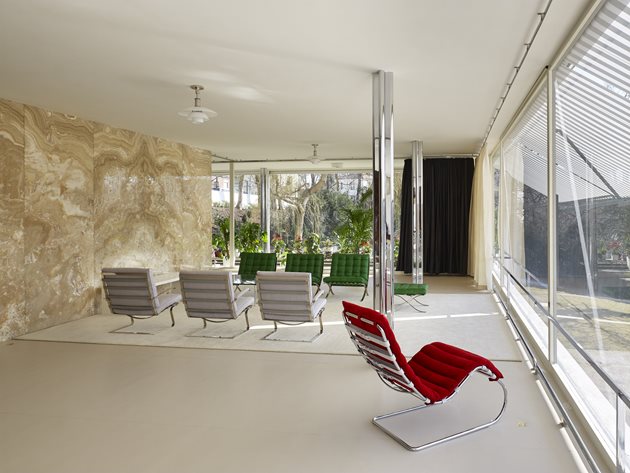 Grete Tugendhat met architect van der Rohe during the time she spent in Berlin. She liked his style, so the 1920s marked the beginning of the cooperation between two enlightened personalities: an incredibly wealthy investor and a forward-thinking architect. The construction works took almost 14 months and the villa cost five million Czechoslovakian crowns, which would have been enough to build around 30 regular family houses at the time.

In 2001, Villa Tugendhat was added to the UNESCO World Heritage List, and it’s no exaggeration to call it a smarthouse of the 20th century. Now, let’s see why!

The villa is a typical example of functionalist architecture which suggests that it contains a large number of new materials and technologies. In Villa Tugendhat, you can find a lot of details typical of functionalism, such as columns, a flat roof, a free floor plan and ribbon windows.

“I very much wished to have a spacious, modern house with clean and simple shapes. My husband was quite terrified of the rooms full of figures and all kinds of blankets he remembered from his childhood,” wrote Grete Tugendhat about her residence. 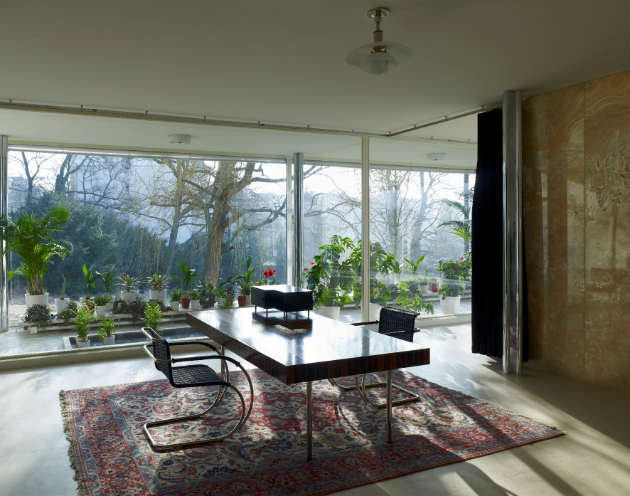 Villa Tugendhat is one of the first privately-owned buildings in the world to use a steel bearing frame, which is unique. The frame shifts the bearing function from the walls onto the subtle bearing columns. In the villa, the weight of all the floors is carried by its 29 columns made of Berlin steel, removing the need for any bearing partitions in the main area and allowing the outer walls of the house to be made entirely of glass. The glass itself was polished using a special technique to nearly eliminate reflections. Its two huge windows could be electronically retracted partially or entirely into the floor which allows for almost perfect connection of the interior with the garden.

Grete Tugendhat remembered that none of the houses they had built after their emigration had as perfect, fresh, and clean air as this house in Brno. The villa features a precisely-designed heating and air conditioning system; in winter, it heats up the air circulating through the house while cooling it down in summer, so this house with South-facing glass walls feels pleasant even in summer. At the time, the design and use of a system like this in a European family house was unheard of. 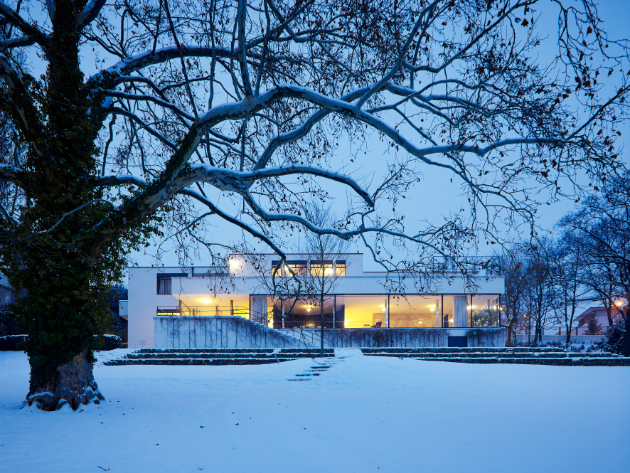 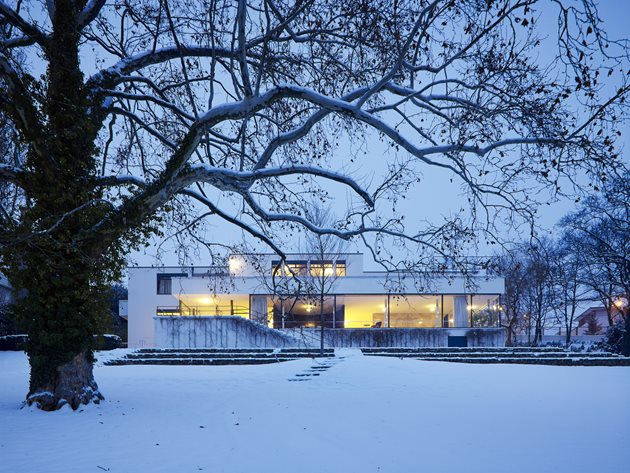 The entire system is controlled by a panel with three levers located in the engine room. One of the levers sets the volume of fresh air needed to be brought into the house, the next sets the volume of the air already inside the house to circulate, and the last lever determines whether this air needs to be heated up or cooled down. The air coming from the street goes through an ingenious three-chamber filter; in the first chamber it’s cooled down by a water shower which falls down on boulders taken from the sea bed, which humidifies the air while the sea salt from the boulders adds a pleasant smell. Then, the air is brought into a filtration chamber featuring inorganic and organic filters made of wood shavings. At the end, the air is heated up and sucked out of the engine room into the main room through a hole in the wall and through apertures in the floor.

Luxury materials and a sense of detail

Mr. and Mrs. Tugendhat spent a lot of money on the furniture designed specifically for the villa. However, it is the materials it is made of that makes them so fascinating. One of them – perhaps the symbol of the villa – is a wall made of Moroccan onyx which lets in fine, goldish light during sunset. The terrace, the floor in the hall as well as the staircase are made of white Italian travertine. The wall panelling, doors, and some of the cabinets are veneered with rosewood, while other furniture is made of zebrawood and ebony veneer. And Makassar ebony was used to produce some other pieces of furniture.

Van der Rohe paid attention to every single detail: the dining table made of black pear tree wood on a metal leg embedded into the floor has rails from beneath so it can be expanded. Thanks to this ingenious idea, the table can comfortably seat from 5 to an astonishing 20 people. 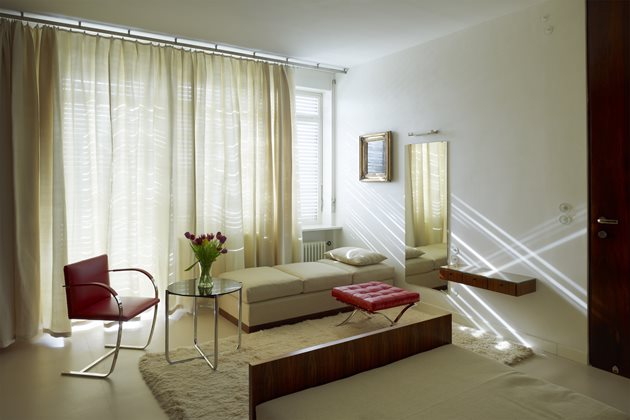 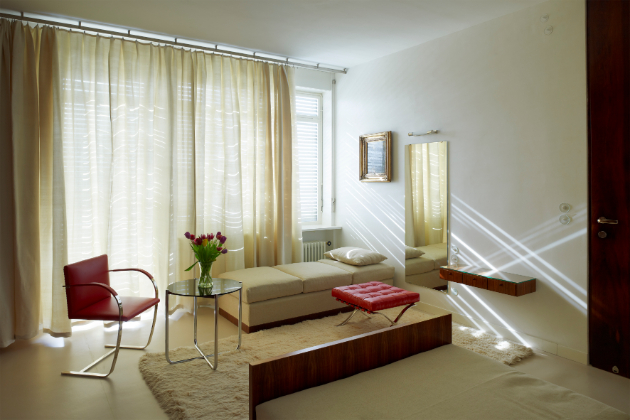 On sunny winter days, when there are no leaves on the trees in the garden, the onyx reveals a special ability. “When it later turned out that the stone was transparent and that some parts in the drawing on its back shone in red light when lit up from the front by the setting sun, it was a very nice surprise for him (Mies) as well,” wrote Grete Tugendhat.

Beauty and functionality lie in the details. The indoor bearing columns are covered in a shiny, brass, chrome-plated coat, and those on the terraces have a brass cover with a bronze, copper-coloured patina. Due to the absence of fixed partitions, the sockets are hidden in the floor made of white linoleum which – together with the glass walls – makes the rooms brighter. 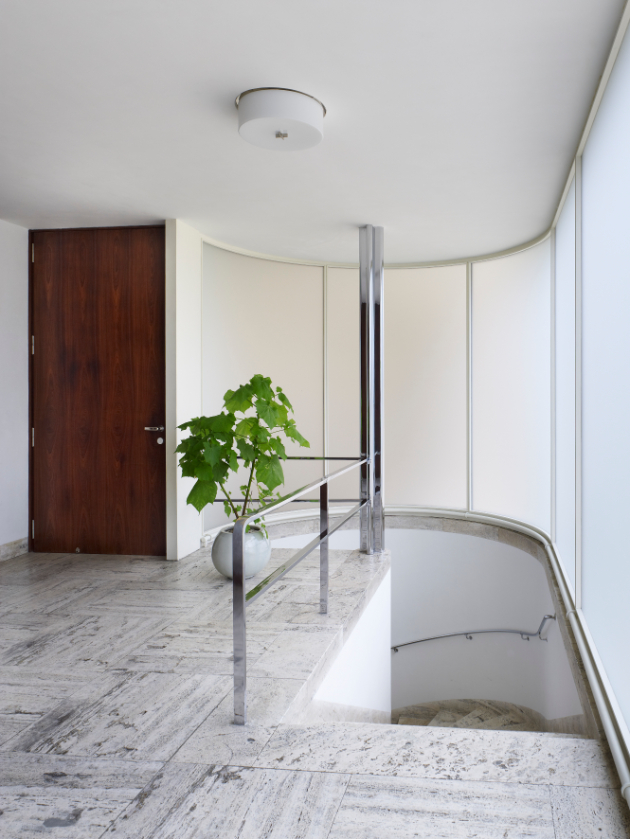 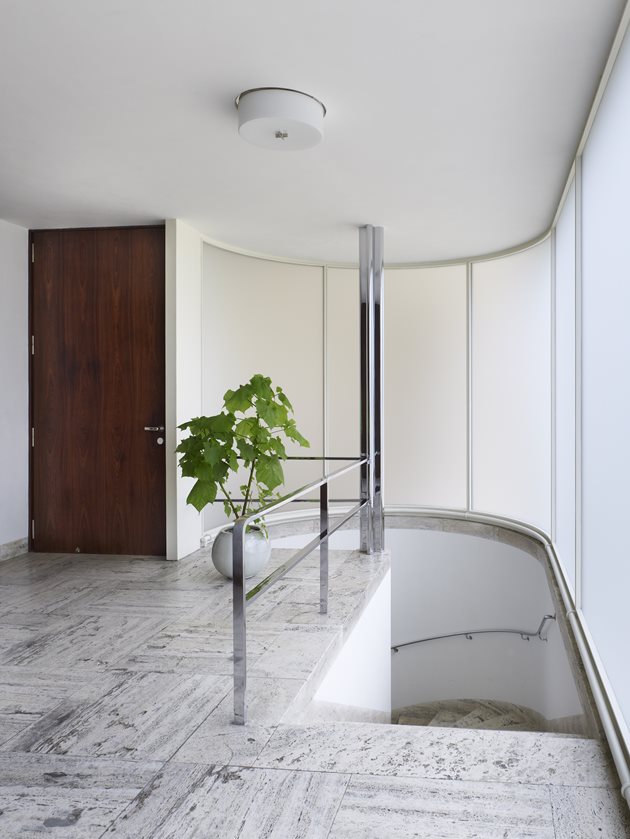 An electric eye used to be located not far from the entrance to the villa to improve the security of the terraces. The terraces are adjacent to the area in front of the house which was separated from the sidewalk only by a low fence, which wasn’t secure enough. However, it’s no longer apparent from the villa drawings where exactly the eye was placed and how it worked.

Villa Tugendhat is undoubtedly the main jewel of #brnoregion, and thanks to its advanced technologies and amazing beauty, it’s sought after by architecture lovers from all over the world. In fact, so many people would like to take a tour of the villa that tickets are sold out several months in advance. Due to the villa’s microclimate, the daily number of visitors is limited to around 150. Even without booking a ticket, however, you can always visit the garden and take a proper look at this beauty of Brno at least from the outside. 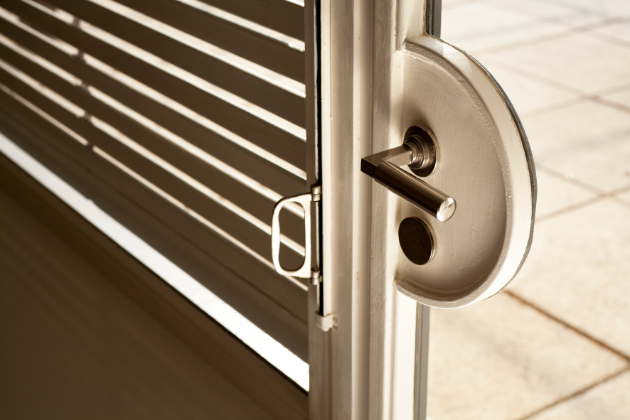 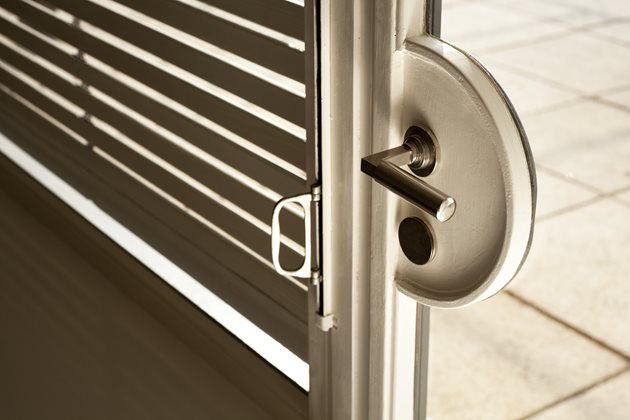 If, however, you get a chance to take a look inside, don’t hesitate! In 2010–2012, the villa underwent a reconstruction (which cost 150 million CZK, i.e. almost 6 million euro) which was thoroughly documented.

Most of the original furniture in the rooms, or at least faithful replicas of it, have been preserved. However, some of the pieces have made quite an adventurous journey, as the villa served its owners only for a short period. Finished in 1930, it was abandoned by its owners only after eight years, as they were forced to leave Brno as well as Czechoslovakia due to their Jewish origin. 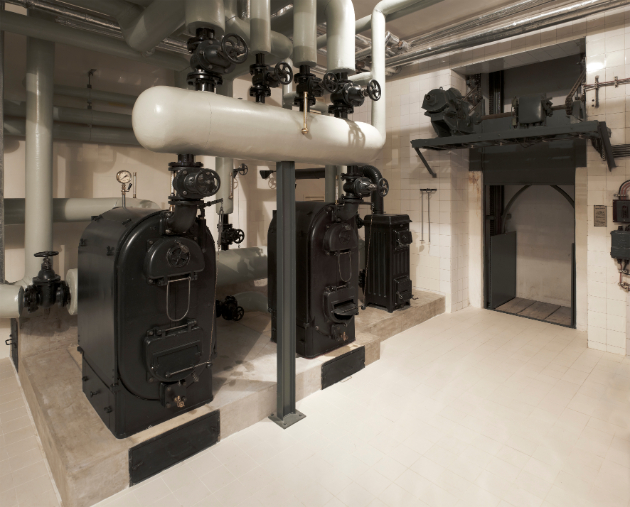 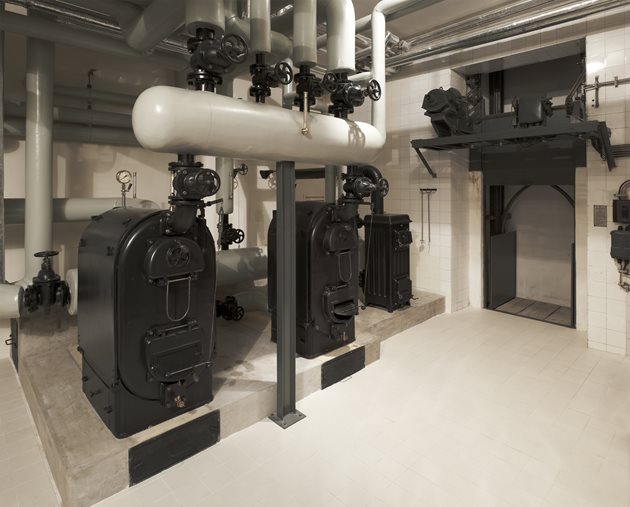 During WW2, the villa served as a headquarters of the Gestapo which dismantled and sold a lot of its furniture and equipment, including the Makassar ebony partition. This partition secretly, yet for everybody to see, served as panelling in the cafeteria at the Brno Faculty of Law, and was discovered only in 2003 by art historian Miroslav Ambroz. Similarly, the onyx wall was to be cut up into tombstones; fortunately, the very first tenant Walter Messerschmidt boarded it up, so it would look like a regular partition. For a long time, it was forgotten, surviving the ravaging of the Nazis and later of the soldiers of the Red Army as well, who moved into the house, along with their horses. At the time, most of the remaining furniture and equipment was destroyed, such as shelves in the library made of exotic wood that were burnt. After the liberation, the villa served as a private school for dance gymnastics for kids, and then the National Treatment Exercise Institute turned it into a sanatorium for children with spinal and body posture handicaps. 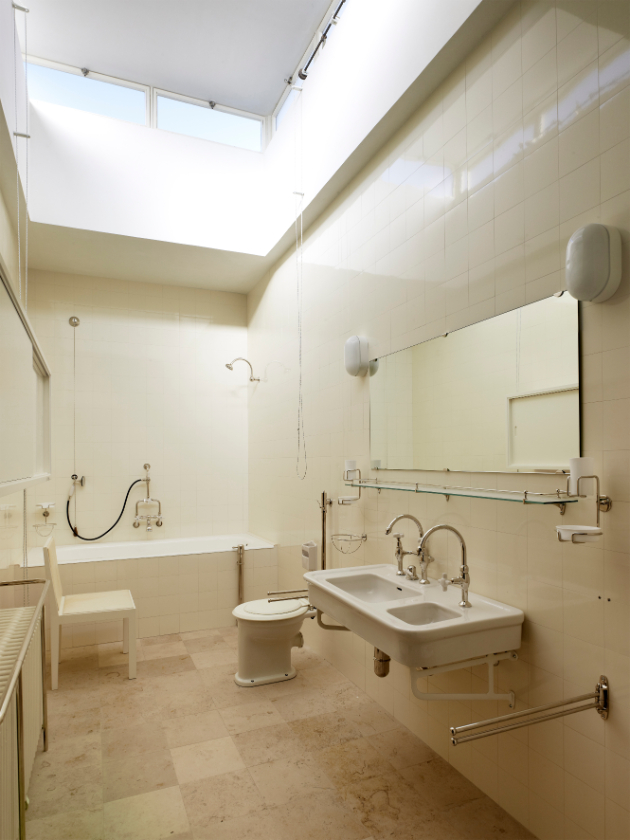 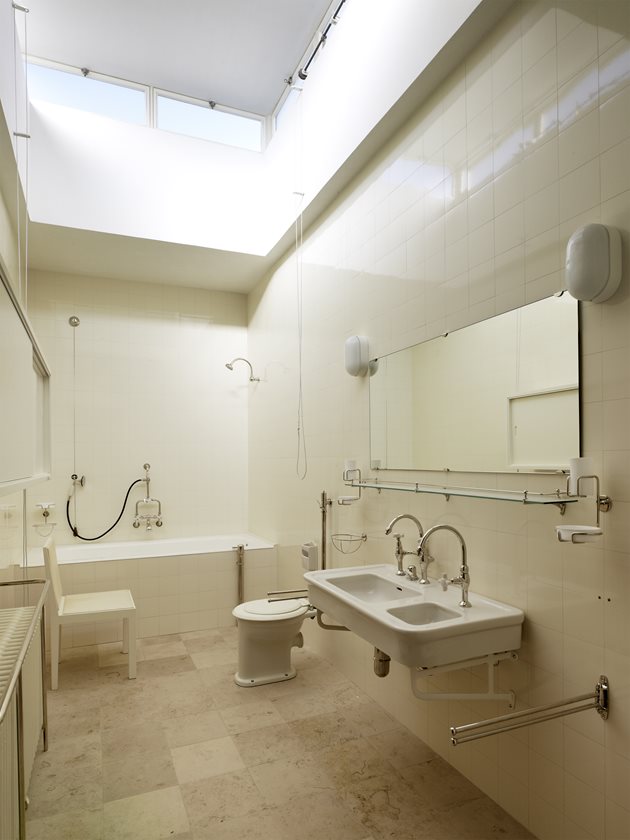 During the following decades, expert opinions on Villa Tugendhat have been changing. While American theorist of architecture Philip Johnson compared the villa to the Parthenon in Athens, a number of Czech architects criticized it for its pomp and luxury, as presented by expensive materials and the inadequately huge size. Some even considered the villa the perfect example of snobbery and a dead end in the modern architecture movement. Today, experts more or less agree that Villa Tugendhat is a pearl of modern architecture and one of the most beautiful examples of functionalism in the world.