Work
Despite having Afghani parents and being born and raised in Iran, the Czech Republic is the place Javad has been calling home for over a decade now. Javad Cihlář produces suits, coats, and trousers tailored to the needs of customers from #brnoregion as well as Vienna. 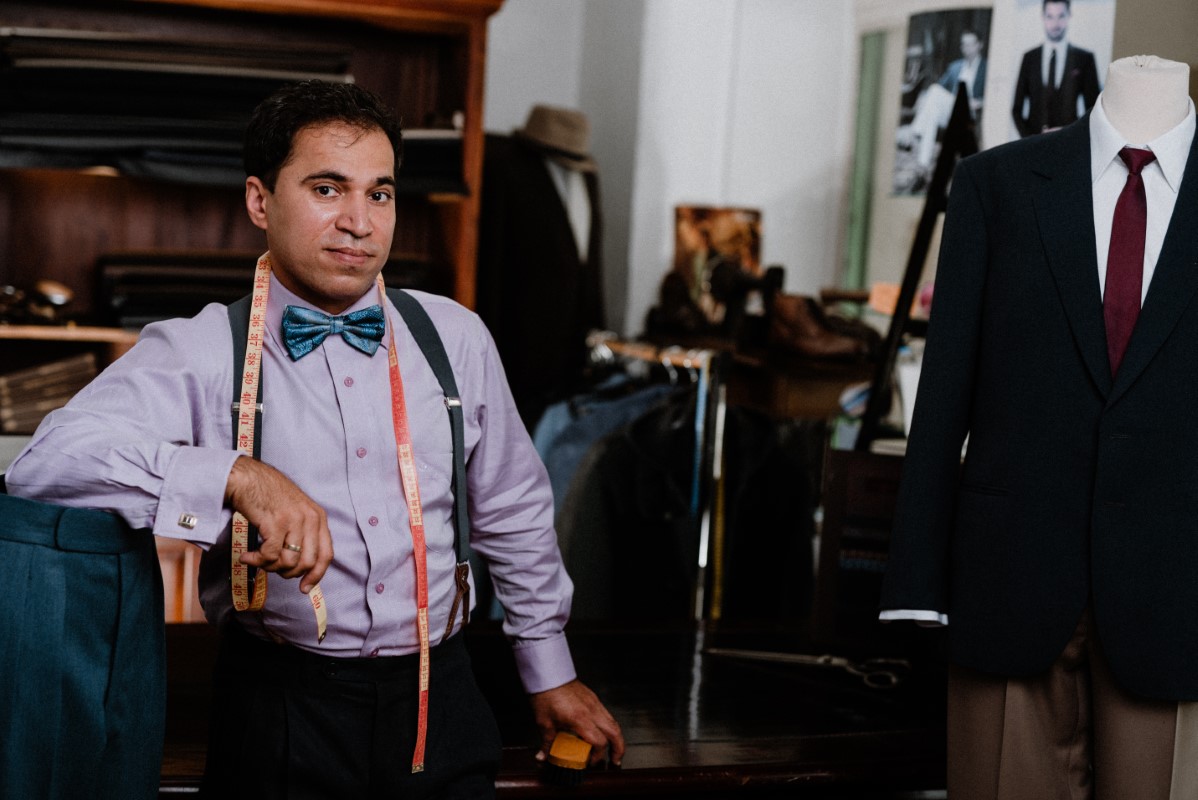 Javad came to the Czech Republic in 2008 when he suddenly decided (or maybe it was a fateful moment, as he keeps saying) to get off a truck bringing him all the way from Greece. His dangerous journey to Europe began at the age of 18, when a friend convinced him to make that big decision.

“I didn’t consider Europe very attractive, actually. However, my mother had just died after a long illness and I no longer had anything in this world, no home. A friend of mine wanted to visit his brother in London, so he asked me to join him,” remembers Javad Cihlář.

Javad’s parents came from Afghanistan. After the Taliban arrived, however, Javad’s father took his wife to safety in neighbouring Iran. It is there that, two years later, Javad was born. “My dad was an educated man and a cleric, owning a lot of land and property in the village, so he felt responsible for a lot of people. That’s why he couldn’t stay with us in Iran all the time and kept visiting us from time to time,” explains Javad. In his position, his father had a lot of friends as well as enemies, and his troubles with Taliban only grew worse. “When I was around six years old, my father’s enemies rose to power and had him killed.” 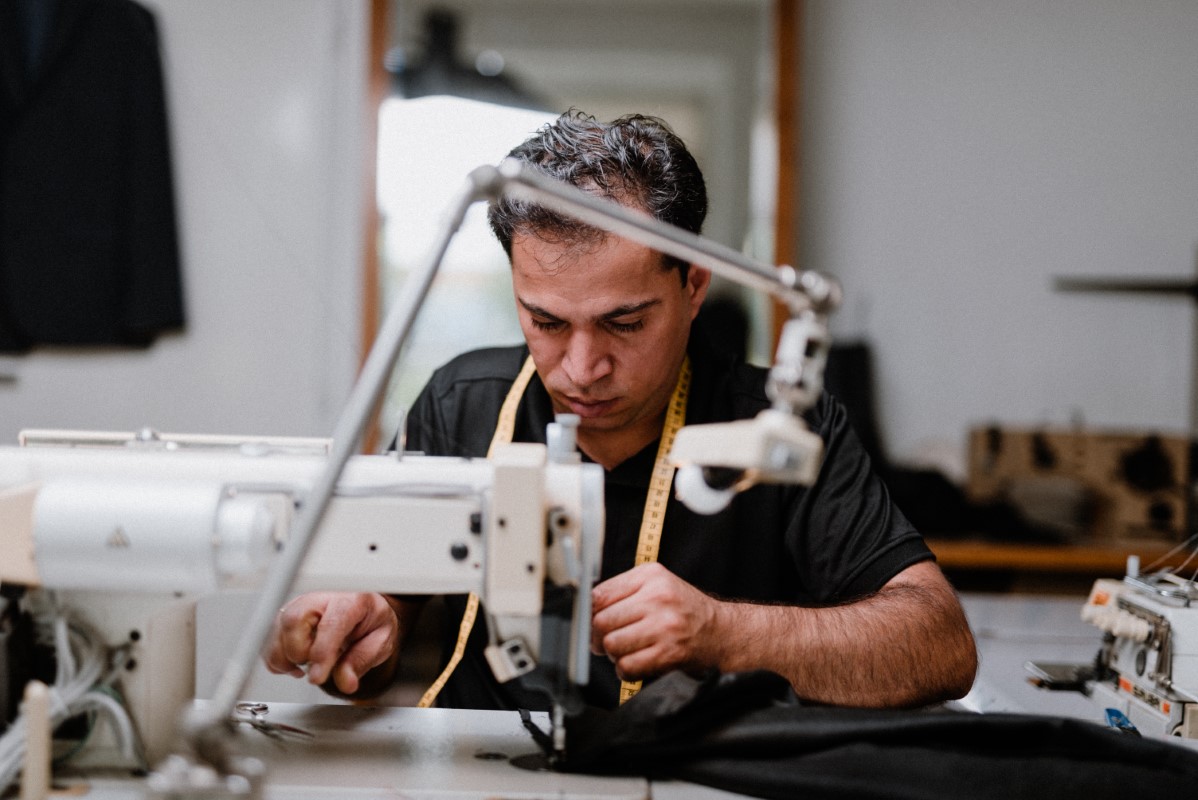 The family then lost all its property and Javad’s mother was left to take care of her son in Iran, all by herself. It wasn’t safe to return to Afghanistan, but their visa expired, so Javad couldn’t attend school. “Mom arranged for me to work at a local tailor’s workshop, mostly so she herself could work. I was the only child among adult men there, which sort of compensated for my missing father, but of course they were strangers. Being a curious child, I wanted to touch everything there and they would beat me for it. All the same, I learnt a lot there. This workshop was my school, even though I did envy my neighbours who could attend a regular one.” Thanks to his immense curiosity, Javad still managed to learn how to read and write from the neighbourhood kids.

He spent his evenings and nights at home helping his mother sew, which gave him a chance to apply what he was learning in the workshop during the day. Eventually, he set up a workshop of his own.

When he was 18, his mother died of cancer, and a new era of his life began. “If my mother hadn’t died, I would have happily stayed in Iran even though it wasn’t my home.”

Love brought him to Brno

After two years spent in the Czech Republic, Javad obtained a long-term visa. His desire to learn new things helped a lot. “At the time, my memory was crystal clear and I was quick to learn. The Czech language fascinated me, so it wasn’t long before I was actively communicating with people around me. In the detention camp I made friends with a Christian woman who took me for a week-long stay with other Christians. I adopted Christianity and joined a group of Christians in Prague.” This way, Javad was able to find a place among common Czechs and, as he puts it himself, he was born again in Prague. At least spiritually. 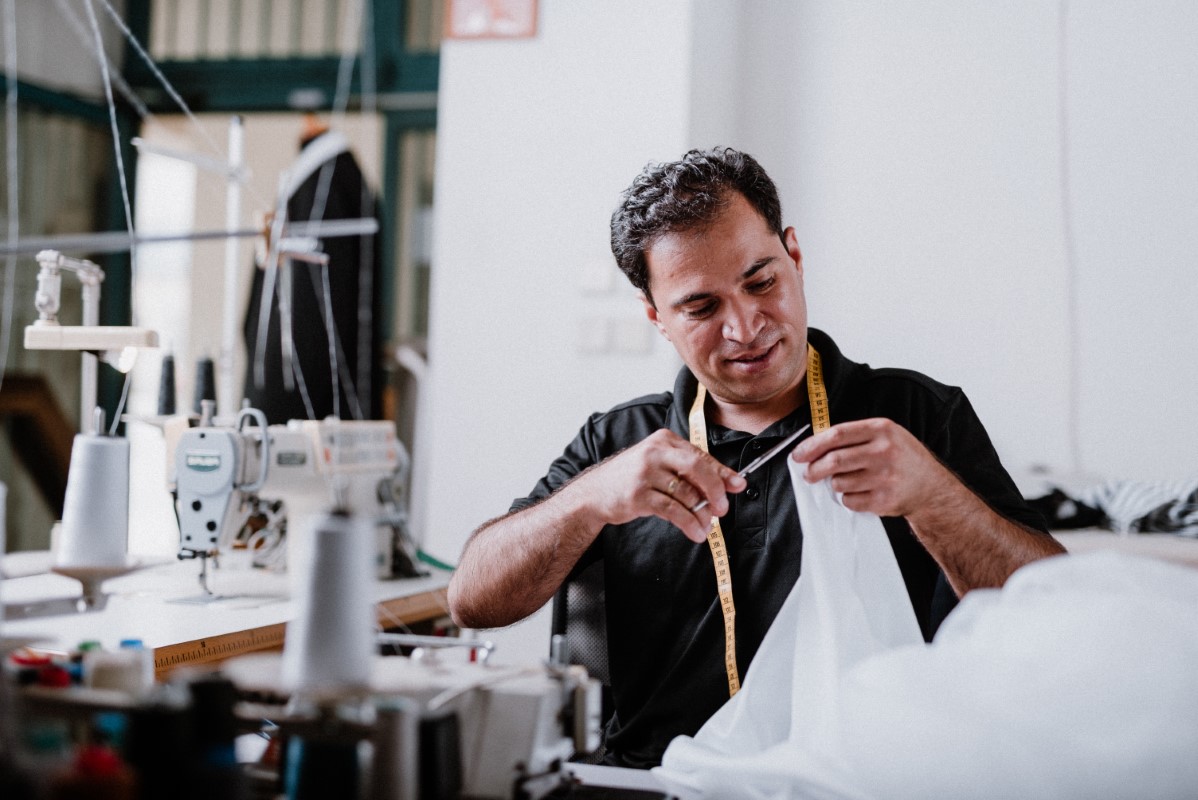 He was also able to return to his craft, spending several years in a luxury tailor’s shop in Prague whose owner – Mr. Hartl – showed him the secrets to producing custom-tailored clothes. “True, I had worked in tailor shops for ten years in Iran, but custom-tailored production is totally different,” explains Javad.

“Mr. Hartl is like a father to me; a very good and tolerant man, indeed. I remember his smile when I met him for the first time as a passionate young boy; I came to his door and said ‘I’ve come to work for you’. He just smiled and asked: ‘And will you work hard?’ ‘Yes, I will,’ I replied. And that was that,” says Javad.

Five years later he met his future wife, a woman from Brno. At first, he would visit her every weekend, but he eventually married her, took her surname, and moved to Brno.

Despite moving to Brno, he continued working for Mr. Hartl for three more years. “Mr. Hartl often travelled to Vienna to see the customers, so he would drop off work for me here in Brno and send his local customers to see me.” Eventually, though, Javad established his own company, but they still cooperate, share the same passion and remain on very good terms.

A good tailor is always hard to find

Javad works on his own, with only his wife helping him with the business. “She’s a great organizer, very reliable. She also understands pretty much everything and has arranged all the documents for me, which I never would have managed on my own,” admits Javad about their roles in the company. 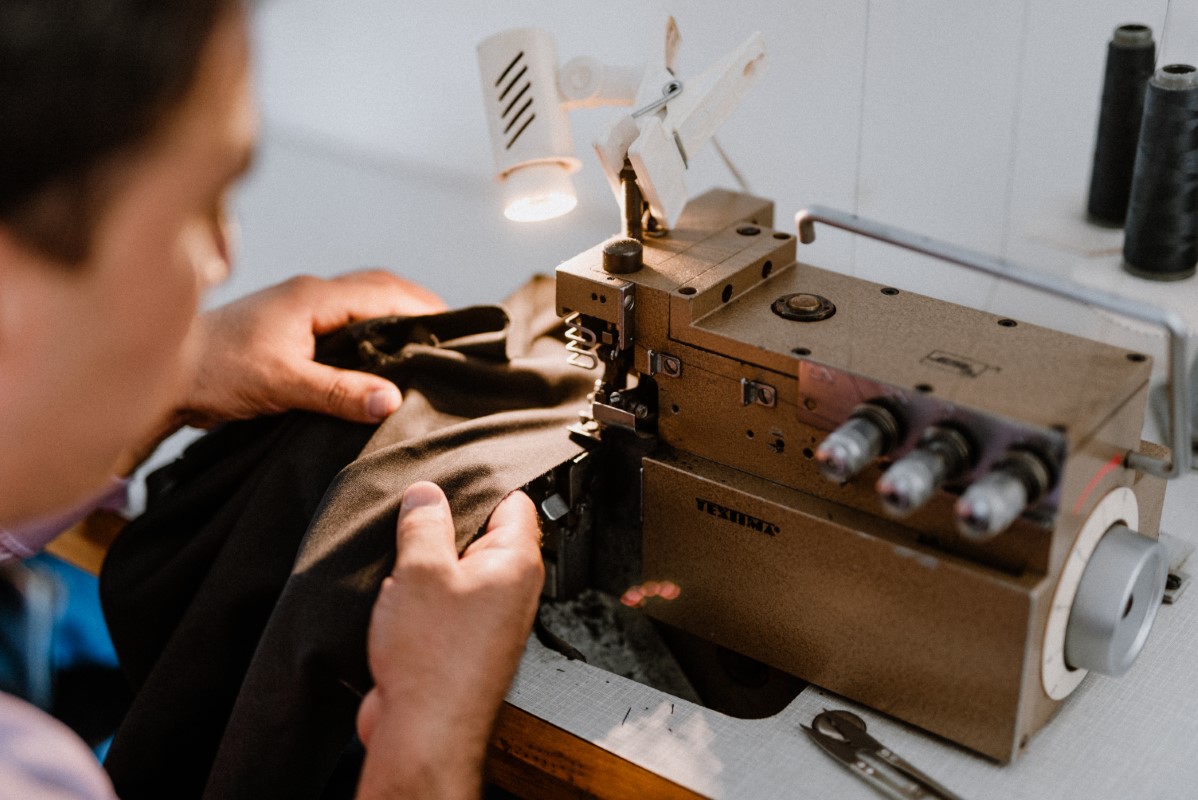 After all, he stays busy enough as it is by doing what he’s good at: sewing. “I focus on the production of men’s dress clothes, but I can create pretty much anything, except for women’s dresses, as I’m not a very good designer. I like to stick to my profession, producing classic clothes that remain fashionable. Some customers want special clothes, and we like to satisfy them.” At the same time, however, he admits that he spends more time in the shop than he’d like to. An assistant would come in handy, but it’s hard to find a skilful person. “The good ones are dead, tired, or already working for themselves.”

Custom-made suits, trousers and coats are his real passion, yet he is forced to balance that with the everyday requests to fix or modify garments as well. “These tiny jobs sometimes slow me down, but I feel the need to serve or help people, so I even trim trousers or replace zippers.” And that’s another reason why the sewing machine never stops in Krejčovství Javad’s shop, even during the coronavirus crisis when there was a shortage of face masks in the Czech Republic. “I had a lot of cloth that was perfect for face masks and not good for anything else at the moment, so I suspended my half-finished jobs and started producing only masks.” Together with volunteers, they delivered them wherever they were needed.

A true man of Brno

Javad would like to show his family where he comes from, but he doesn’t feel like returning to Iran or Afghanistan for some time: “My childhood was full of sad experiences, so I don’t want to move my life there.” 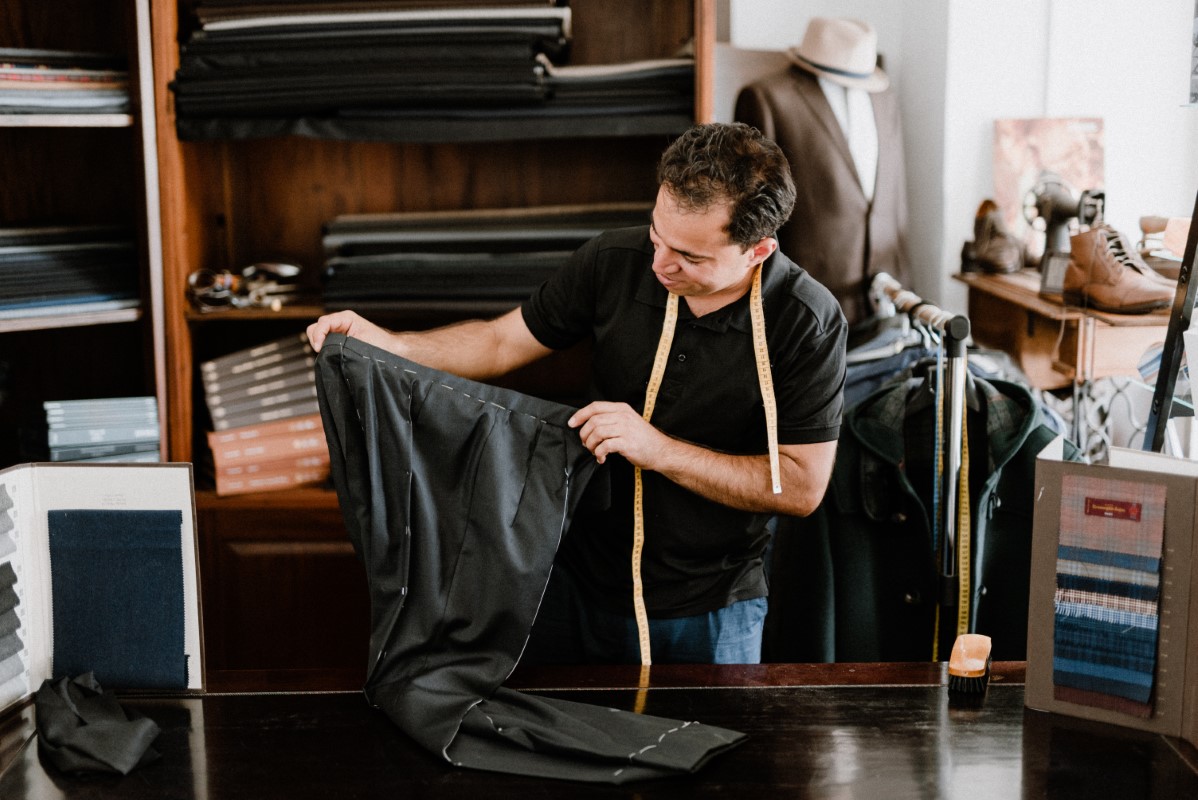 “There’s a saying: ‘You don’t know where you come from until you get married.’ I got married in Brno, my family lives here, we have a place to stay and work, I established a company here, so I have to enjoy it here. I’m already a true man of Brno.”

In short, Brno is the place he calls home. “When I arrived in the Czech Republic, I somehow felt this country would become my home. Sure, there have been things I’ve struggled with, such as the language, but I’ve overcome them and gained Czech citizenship. I accepted the Czech Republic as my home and only wanted the Czech Republic to accept me. And that’s what happened,” concludes Javad.

When it comes to Czech cuisine, Javad always gets excited about fruit dumplings: “The first time I tried them, I had 5 small strawberry ones. Then I asked for seconds. Twice.” He also likes Czech sauces, ideally dill sauce, or the traditional roast pork with sauerkraut and dumplings.

“You have to be unique in some way. There aren’t too many tourists in Brno, so it’s full of locals and you have to win their hearts over. And the people of Brno are picky. Be unique, so your people have no choice and don’t leave you for competitors.”