30 years ago, we beat communism

Live
A true miracle happened towards the end of 1989: the communist regime collapsed and the countries of Eastern Europe set out on their path to freedom. And Czechoslovakia was one of them.

These days, the Czech Republic is looking back on a crucial event in its history – the 30th anniversary of the Velvet Revolution. You may have heard about it before, especially if you come from Eastern Europe; if you haven’t, though, then remember that for Czechs November 17th is one of the most important dates in their history. And why is that?

In our country, this date isn’t related to 1989 only. Originally, it remembers sad events from 1939, when Czech universities were shut down after a series of student demonstrations that resulted in around 1,200 students getting arrested, 9 student leaders executed, and the others dragged away to concentration camps.

International Students’ Day marks the tragic events that took place from October 28 to November 17, 1939, in what used to be the Protectorate of Bohemia and Moravia. Established in 1941 in London, at the occasion of the second anniversary of these sad events, it’s the only day of international significance with Czech origins.

“They are beating our children!”

On Friday, November 17, 1989, a permitted and traditional reverential event took place in Albertov, Prague to remember the events from November 1939. As usual, university students gathered there, but that’s all that was “usual” about it. That year’s situation was different to what it had been in the past. The totalitarian regimes in neighbouring countries had been collapsing one by one, the power of the communists had weakened, and people had been growing dissatisfied with the country’s economy and its politics. It only took a few courageous student speeches to set the following events in motion, and thousands of young people (the police estimated there were 15 thousand participants, while other sources mention up to 50 thousand) set out on a protest march through Prague. The march was then brutally attacked by the police and this violence against the defenceless university students was the last straw, after which most Czechs stood up and took action. And thus the revolution began. 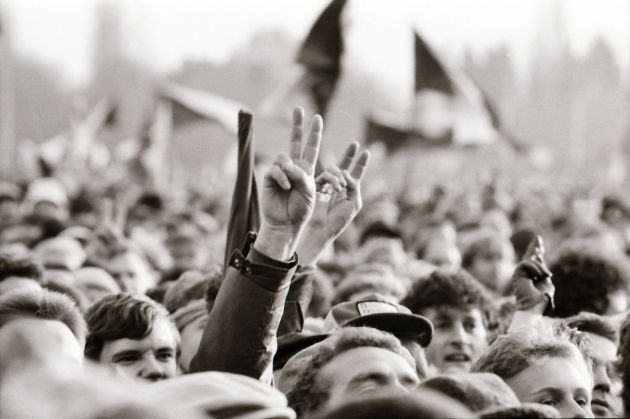 “Among other things, we need to teach ourselves as well as those what we’ll one day need the most: the art of having a dialog, tolerating and respecting each other. We need to learn to speak frankly and speak the truth, not avoid solving problems, and not to stay silent when witnessing injustice. And that’s what we need to start with today! Our nation needs not only educated, but mainly honourable people! Not only experts with a diploma and a twisted conscience!”

Martin Klíma, one of the leaders of the Velvet Revolution in his speech at Albertov on November 17, 1989

The level of brutality of the attack on the students shocked everybody, but it turned out to be the last violent clash during this revolution. During the following days, not a single person died, hence the name of our revolution. The communists felt their power was weakening and no longer had direct support from the Soviet Union, where major changes had been taking place under the leadership of Mikhail Gorbachev for some time. For their part, none of the members of the communist politburo dared to risk their necks by calling the army and People’s Militias to massacre the growing crowds that continued to fill city squares throughout the country as the days went on.

Unlike the hesitant communists, a group of dissidents around Václav Havel took action and succeeded at what’s usually the most difficult part of coups – transforming the main ideas of the revolution and incorporating them into the foundations of a new regime, while moving beyond their rebel nature, assuming power, and turning themselves into leaders.

The Velvet Revolution (also known as the Gentle Revolution) got its name from its non-violent nature. Except for the events from November 17, 1989, when the protesters were attacked by the police, there was no violence and nobody died. It’s unclear who was the first to call it the Velvet Revolution, but it is generally agreed that it was quickly picked up by several foreign journalists.

Officially, the revolution of 1989 ended on December 29, when Václav Havel was elected the first non-communist president after a long 41 years; he was elected unanimously, even by the communist MPs who not long before had considered him the main enemy. This way, the absurdity of real events beat all of Havel’s absurd dramas…

Also, this election put an end to the student strikes.

“Truth and love must prevail over lies and hatred!”
Václav Havel during the Velvet Revolution in 1989

The most beautiful days of our lives

This text only roughly sums up what took place in our country during those few weeks, and it doesn’t come close to explaining all the moments worth mentioning. Not everything was as simple and clear as it looks now, and even though a lot of things we didn’t wish for have happened during those 30 years (such as Czechoslovakia breaking up), the good things still prevail. The Velvet Revolution put an end to 40 years of communist rule and brought about some deep social changes. People’s lives changed on every possible level and in every possible way. Instead of the communist regime, we have a pluralistic democracy here, and instead of a centrally-planned economy there’s market economy now. We’ve joined the European Union, the Schengen Area, as well as NATO.

When it comes to us – ordinary people – we gained freedom and could suddenly live our lives the way we wanted. We can say, read and write whatever we want. We no longer have to lie to our kids about what’s happening behind the door to our apartment. Also, we are free to travel and the Czech passport has made it into the top ten strongest and most sought-after passports in the world. And we can do business – another thing we were forbidden to do – and we are free to be creative the way we want to and change our world for the better.

When it comes to memories, people mostly recall their beautiful and unrepeatable feelings. The entire nation stood up and pulled together. And it’s unlikely that people will experience such a sense of belonging and unity ever again. For the young generation entering adulthood, the revolution literally kicked open the door to the entire world. Those who were young then still remember the November days in 1989 as the most beautiful period of their lives.

And despite all the bad and unexpected things that took place later on, the Czechs are in agreement today, as 73% of them think that the Velvet Revolution and the change of the regime it brought were absolutely worth it.