#BRNOREGION
/
News
/
GREYCORTEX – A startup? Yes and no

GREYCORTEX – A startup? Yes and no

Do business
Even though GREYCORTEX celebrated only two years of existence in May, the work on its main product started a long time before. In the area of Internet security, GREYCORTEX are leading the industry and not only in the Czech Republic, as they begin to successfully expand abroad as well.

Everybody who has something to protect is our customer

No, GREYCORTEX is far from the only company dealing in security on the Internet. However, its GREYCORTEX MENDEL product works in an absolutely unique way, as it searches for anomalies in computer networks and points them out. During the process, it learns how the infrastructure works and then tries to predict what should happen. If something unpredictable happens, it focuses on that event and determines what’s going on – whether it’s an attack, malware, or something else.

GREYCORTEX MENDEL is suitable for virtually any company or organization, no matter whether they need to protect data about their customers (such as telecommunication operators or banks) or their know-how.

In the beginning, there were two students

Petr Chaloupka spent around one year preparing to establish GREYCORTEX, but the history of its main product dates much farther back. “The very origins of what we have and sell today were laid at the university in Brno,” explains Petr, GREYCORTEX CEO, describing the work of Petr Chmelař, at the time a student at the Brno University of Technology (VUT).

The then postgraduate was dealing in research of videosignal anomalies and on several occasions he and his team even passed the prestigious US NIST Challenge, in which the global elites of machine learning regularly participate. Together with another VUT student, Michal Drozd, who worked as a security consultant while still a student, they searched for a method to make use of this anomaly-detection technology in IT security.

A company of nine associates

Petr Chmelař and Michal Drozd later brought this technology to a Czech technology company, where they further developed the product together with its newly-established team. At the time, nobody had any idea that in just a few years they’d all found GREYCORTEX and become its associates.
In 2014, the product was already being sold to its first customers, which is when one of the last associates, Chaloupka, took interest in it. When the company was being founded, he made use of his experience gained from working with several technology companies. Starting as a software tester and advancing to managerial positions and the position of a software engineer, he emerged in the story of GREYCORTEX as the CEO of a major Czecho-Slovak distributor of security software.

“Once the product reached an advanced-enough phase, my current colleagues approached me asking whether we’d like to sell it. I had known Michal Drozd for some time already, so I asked them to come show it to us,” says Chaloupka on how he got familiar with the product.

The meeting didn’t result in any cooperation, but Chaloupka took interest in the technology, as it seemed that development of the product under the original company would be suspended. He started to cooperate with the authors of the technology with the aim of buying the product and – together with them – founding their own company.

“It had taken me 42 years to find something so interesting that I’d start my own business,” remembers Chaloupka.

However, establishing a company wasn’t so easy and pretty soon they realized that they’d need an investor to buy the product. Once again, Chaloupka’s long years of experience and contacts were helpful when he convinced his acquaintance Václav Muchna from Y Soft and Miloš Sochor, CEO of Y Soft Ventures, that it made sense to invest in their particular product.

“That’s how we established GREYCORTEX in May 2016, purchased the product, received the investment from Y Soft, and have made it to where we are today,” says Chaloupka, summing up the path to their own company.

When everything clicked in May 2016, there was a huge relief, since some of them had spent all their time establishing the company. “After we finally got used to having a company and a good product, the everyday routine began. Hire more people. Make sure the product keeps moving forward. Search for new customers, as the few we had at the time couldn’t keep us going.” And that’s one of the reasons why Chaloupka says that they both are and aren’t a startup; they didn’t have to develop a new product, but they had to learn to work as a company.

In order to do that, they participated in the JIC Master program in 2017. “We made perfect use of that time. Looking back I can say we didn’t waste a single minute. It helped us find a direction, organize our sales, and take a look at how our customers see us. Just priceless,” says Chaloupka about the benefits of JIC at the time.

Today, the JIC INMEC building is where GREYCORTEX is based, and according to them one of the main benefits is being among companies that think similarly and inspire each other. 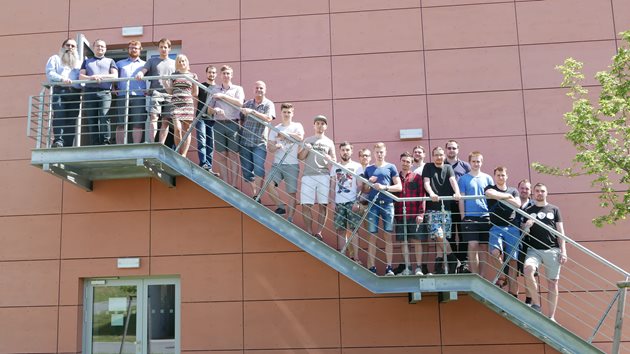 From Brno to the whole world

In the last two years, GREYCORTEX has moved to bigger offices and its team has grown from eight to over 35 members. They have dozens of customers and recently opened a branch in Japan. Even though they knew from the very beginning that their product wasn’t meant to stay local, they wanted to become successful in the Czech Republic first. And this strategy paid off:

“In Japan, we were asked what customers we had in our country and how satisfied they were. And only then did we manage to find a strong partner who believed we were worth the a try – as we could not only behave and negotiate, but also had a good product, could sell it, and were successful on our local market.”

Abroad, membership in the ESET Technology Alliance is helpful for GREYCORTEX. The aim of the Alliance is to better protect company customers by offering a number of additional solutions for IT security, which is where GREYCORTEX plays a major role.

Also, Chaloupka is satisfied with their new business relationship with Konica Minolta, where he used to work. In this case, GREYCORTEX works on system security for the new Workplace Hub product which enables companies to print, copy and more by unifying the entire IT infrastructure in a company.

We don’t want to be a second Avast, but the first GREYCORTEX

These days the ambitions of GREYCORTEX are high: “We’d like to create a company here that would be recognized on the global market in the sector we deal in,” says Petr Chaloupka, quite simply summing up the objectives of the company. And he adds that they’d like to stay in the Czech Republic and in Brno, contribute to its good reputation, and even raise the next generation of experts. “We’re not so naive to think that all those who join us will remain here and work solely for GREYCORTEX. However, we’ll be happy to see people join us, learn their job and then establish their own company and become successful.”