Live
Just like in the countryside, cities throughout Europe suffer from hot and dry summers that make living in them unbearable. There are some measures, however, that can be taken to help cool public spaces down, and the international LIFE Tree Check project is focused on helping plan and implement them.

The idea behind LIFE Tree Check, which aims to help cities handle hot summers, was born several years ago in #brnoregion at the country’s largest environmental foundation, Nadace Partnerství (Partnership Foundation). It has vast experience with projects improving the environment and knows pretty much everything there is about the quality of public spaces.

“As the impacts of climate change gradually manifested in the Czech Republic, a need emerged to deal with public spaces in terms of aesthetics and ways they can continue to serve people while helping offset worsening thermal conditions,” explains Martin Ander, lead of LIFE Tree Check. 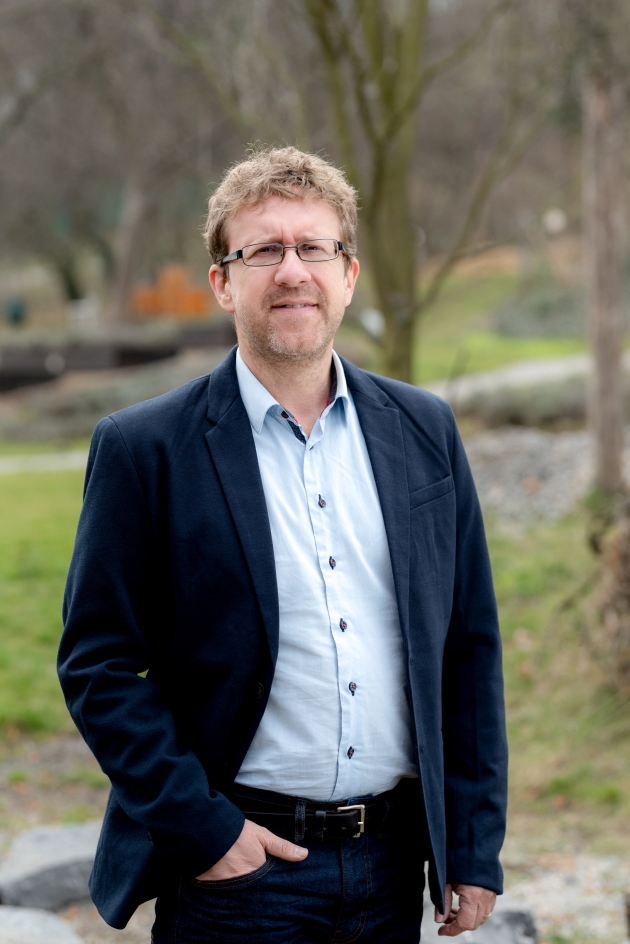 Hot stains on the environment

The most distinctive consequence of climate change in cities are heat islands.

These are areas that, for various reasons, get much warmer than those surrounding them. The large number of reinforced surfaces and buildings in cities absorb sunshine only to subsequently radiate it as heat. This raises the temperature in cities by several degrees when compared with the surrounding environment, making them much more uncomfortable and even dangerous during heatwaves. 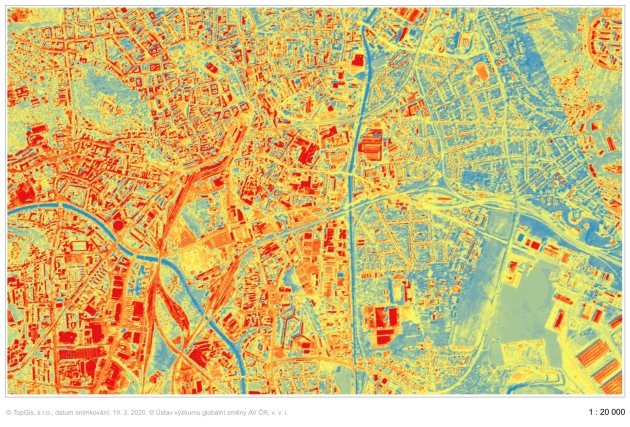 “This can be fixed by improving green infrastructure, i.e. by adding more green areas such as parks or lines of trees in the streets,” explains Ander.
Green areas provide shade for reinforced surfaces, preventing them from absorbing as much heat, and they also moisten and cool down the air around them.

Seven institutes are involved in the Life Tree Check project, which is active in eight pilot cities in the Czech Republic (Prague, Brno, Ostrava, and Pilsen), Slovakia (Prešov and Košice), Poland (Wałbrzych), and Hungary (Budapest). The tools created throughout the project will be tested by these cities, and the Foundation will then share them with other towns in the Czech Republic and neighbouring countries.

Path leading out of the maze of investment processes

One of the expected key outputs of the project is a set of recommendations for cities on how to adjust their investment processes – the path all projects take from planning to implementation. Currently, many smart measures get lost on their way through this process, creating stark differences between how a street looks in its proposal and reality. “Sometimes even the authorities are surprised to see there are no green areas in the final investment,” confirms Ander and adds that there needs to be a designated person to guarantee the quality of adaptation measures during the entire investment process.

In the Czech Republic as well as other Central European countries, individual departments of the public administration rarely cooperate with each other. When it comes to a reconstruction of a street, the companies taking care of utilities or roads are responsible for the main part of the investment, and they often follow established procedures with little regard for how pleasant the final public space will be for its users, especially in hot summers.

“We’d like climate change to become a major topic across all the departments,” says Ander.

The rigid Czech norms and overly complicated construction laws currently in place tell communities exactly how to accept new zoning plans and don’t contribute to more trees in the streets at all. They make it hard to plan adaptation measures and include specific priorities or other modern elements when planning “smart cities”.

And this is exactly where Life Tree Check intends to help, using a database of best practices. 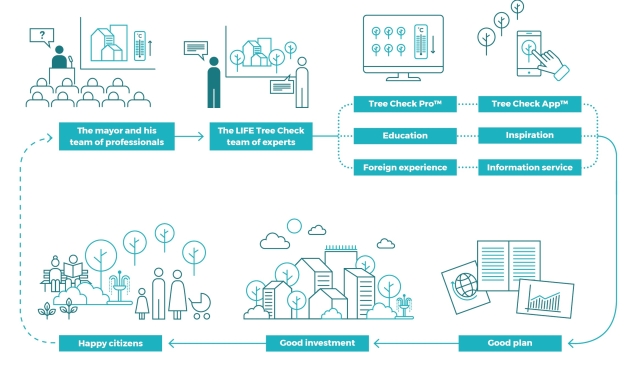 The Partnership Foundation has already been collecting them as part of the Adapterra Awards competition, which rewards successful adaptation measures against drought and heat. It also connects anyone interested with investors, so they may pass their experience and know-how on. “We know the numbers behind the benefits these projects bring to their surroundings. Replicability is high on the list of criteria, and we look for what works and can be implemented in the Czech environment as well,” adds Ander. He also emphasizes that,  along with communities, they also try to motivate large companies, as well. 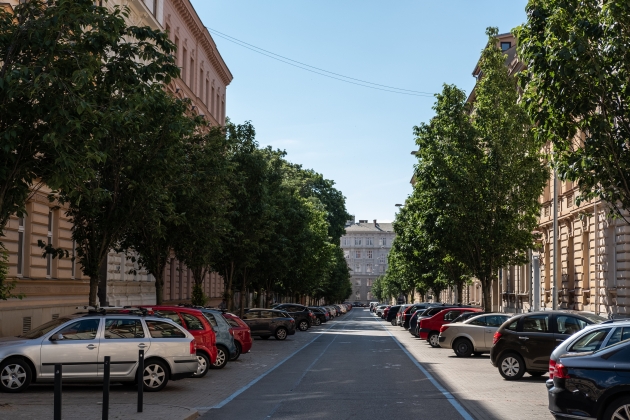 Technologies have a role to play in green city planning, too. By the end of the year, the Tree Check PRO program will be ready to be tested in pilot cities. When planning the implementation of a new street or the reconstruction of a square, it calculates not only its financial demands but also the impact of the planned green elements and reinforced surfaces on the “feels like” temperature. “Hopefully, this software will illustrate to a lot of people from technical disciplines and help them realize that public spaces can contribute much more to residents’ quality of life and convince them to adopt better methods to accomplish this,” says Ander.

The app will be an extension of the existing Stromy pod kontrolou (Check Trees) database program by Brno-based company Safe Trees, a guarantor of the Tree Check PRO software. The company’s current tool helps systematically manage and care for a large number of trees in cities. Used by Brno as well, it makes taking care of its nearly 17 thousand trees easier.

To raise awareness of the role of green areas in cities, the Tree Check App will be used, as it uses artificial intelligence to identify trees from photos. Simply take a photo of a tree and see all the related interesting facts displayed – not only what sort of tree it is, but also how it cools down its surroundings, how much water evaporates from it, who last watered it, and other information interesting for fans of green areas in cities. 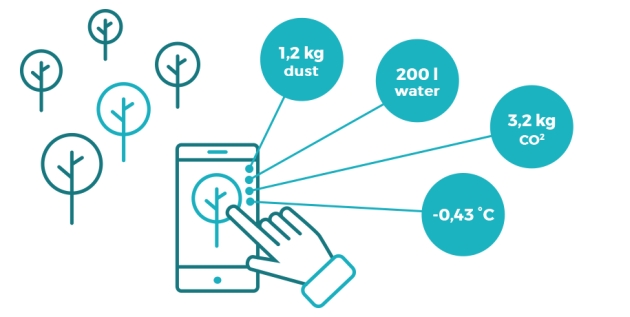 "The idea behind this is based on games like Pokémon Go or Ingress, only instead of pokémon, you keep collecting trees. And you can easily become an expert on birches or ash trees,” says Ondřej Veselý, author of the app.

The Tree Check App will be released in 2021, available in the languages of all the countries involved in the LIFE Tree Check project. And there are already plans to translate it into English and other languages as well. 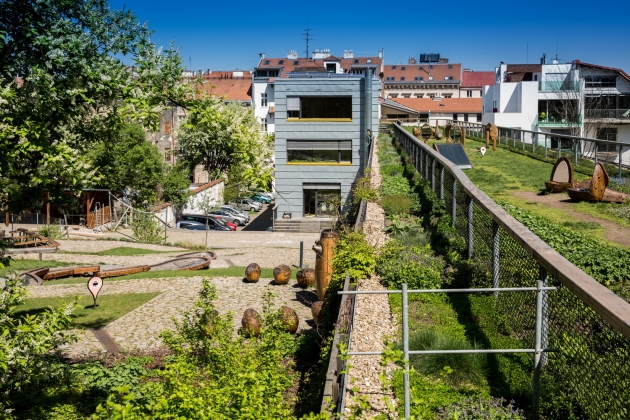 The Partnership Foundation has been providing technical consultations in the areas related to green constructions and running Open Gardens, a carbon-neutral installation with administrative buildings in the city centre that is setting an example for how modern technologies can be applied in these efforts.

Even though Ander says the number of adaptation measures could be growing faster, there has been a clear reaction to drought in recent years. “A growing number of people asks us about the ways to proceed and what to do to fight drought. Our answer is to implement projects of blue-green infrastructure,” concludes Ander and says that trees and water retention should be considered essential parts of every city.