Live
Open Gardens is an educational and consulting centre located in the centre of Brno where a unique passive house lies, literally, hidden away. It’s the perfect inspiration for building new houses as well as remodels.

The Partnership Foundation is the biggest Czech environmental foundation based in Brno. And it’s here, in the very centre of the city, where in 2014 it had its new offices built, surrounded by an educational garden. The aim was to remodel an existing building, add another one with more offices and a lecture hall, and re-cultivate its large garden at the foot of Špilberk Castle. Both buildings are surrounded by green vegetation which spreads onto the roof of the new building, too. 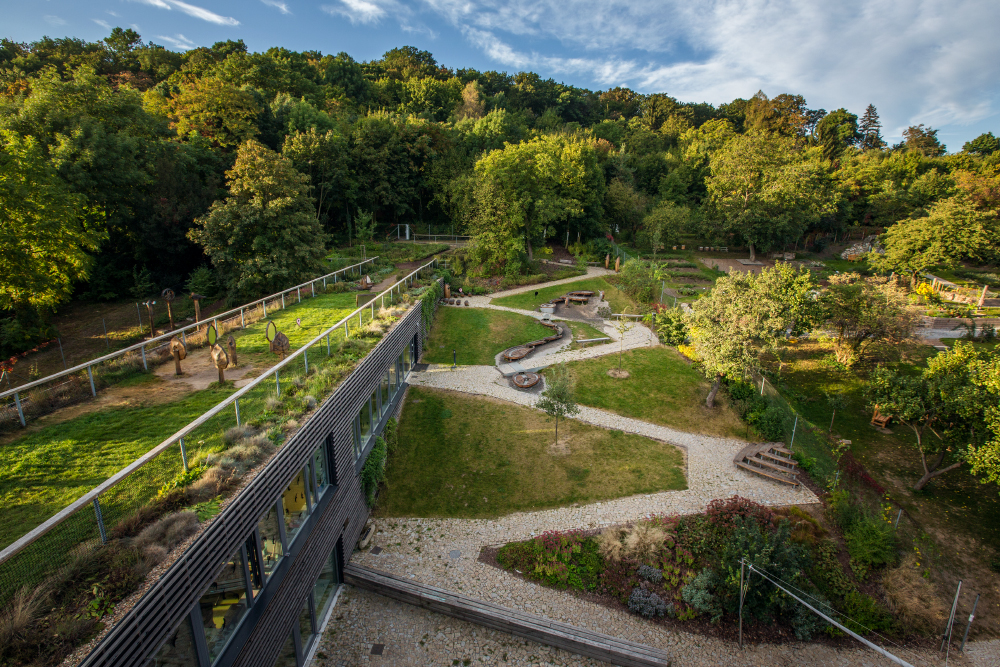 First of its kind

The Foundation wanted to build a modern headquarters as a passive building in an interesting architectural style. At the time, it seemed almost pointless to build a company headquarters as a passive building; also, there were no standards for passive administrative buildings and the entire know-how had to be brought over from neighbouring Austria. Today, however, the situation is different and the building is inspiring others and the Foundation is more than happy to share its know-how. 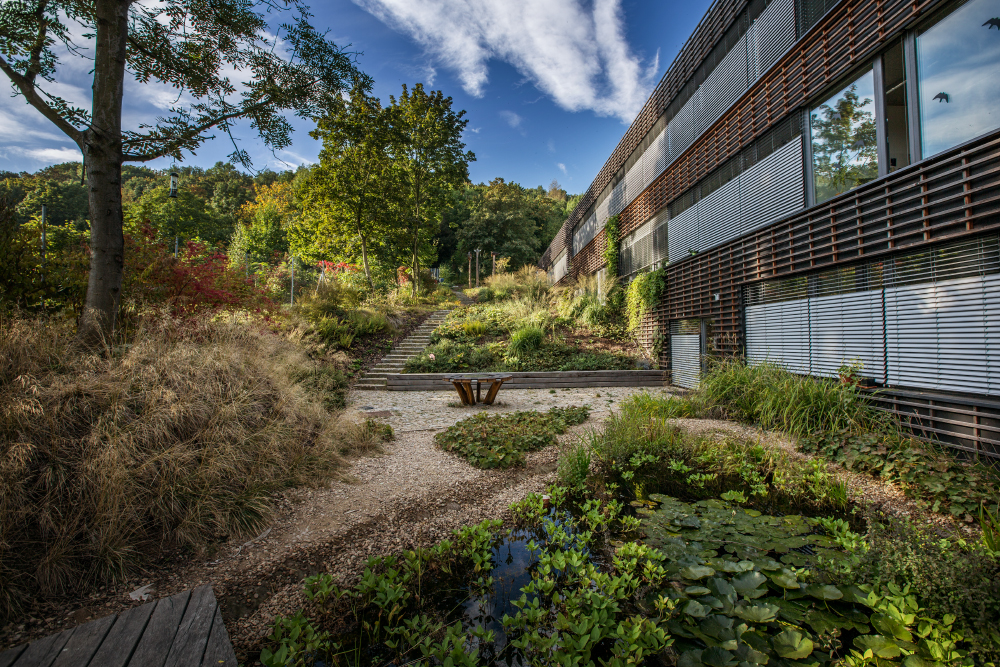 The designers fulfilled the assignment perfectly, though. They abandoned the original idea to build a wooden structure, as it wouldn’t ensure the building didn’t overheat in summer. Also, air-conditioning was out of question. It was necessary to use a material with better accumulation abilities, so they chose a ferro-concrete structure with concrete ceilings and what is called an “active core”. The ceilings radiate the accumulated heat or, on the other hand, cool down the rooms. Together with deep boreholes and a thermal pump, they make sure the temperature inside remains ideal.

The building boasts excellent accumulation abilities. Even when heating or cooling is completely turned off, the temperature never drops below 22 °C in winter or rises over 26 °C in summer, provided you don’t leave a window open overnight. If you do, it can take up to three days for the temperature to rise back up to normal in winter.

In the entire premises, there are over 70 measuring devices and several hundred sensors to measure energy consumption while controlling all the active elements, such as blinds, lights, and a heat recovery unit. There’s a special sensor in each room which automatically turns off all the appliances upon detecting no people have been there for 15 minutes, thus helping to further reduce energy consumption. Also, there are no light switches, as the lights automatically detect when they need to turn on and off. 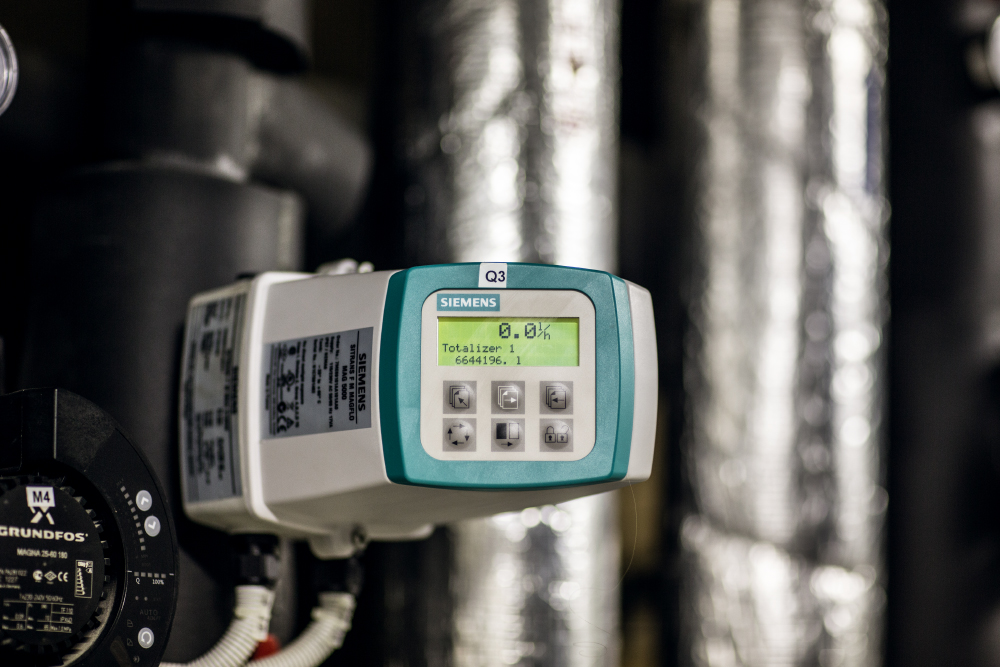 Anybody is free to display the real-time data from the sensors online. Operation manager Vlastimil Rieger adds: “Thanks to our monitoring we know that the consumption of energy spent on heating and cooling is seven times lower here than in any common administrative building.”

Thanks to its three underground rainwater tanks, the building consumes 60% less drinking water than when it would use only tap water. Together with the water from its own wells, the rainwater is used for irrigation and flushing, and it also flows down the interactive educational element in the garden which simulates watercourse. Not once has it been necessary to use drinking water for flushing since the building was opened five years ago. 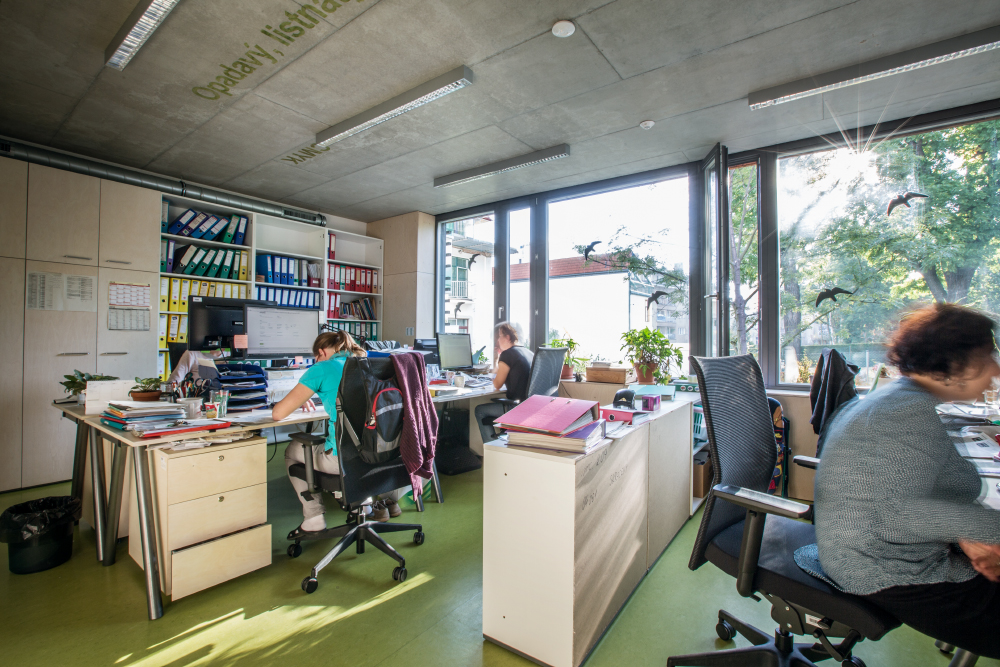 In the fight against drought as well as high temperatures, the intensive green roof of the building is an excellent aide. The designers extended the garden to cover the roof as well, so the temperature on its surface is lower in comparison with common roofs made of roofing tiles, sheet metal or asphalt. The green roof absorbs rainwater while water from the soil as well as the plants evaporates, cooling the surrounding air. The entire surface of the roof insulates the building as well.

“We discovered that the roof could absorb up to 70% of the energy radiated by the Sun. The temperature on a red roof can easily reach 70 °C, while on our green roof it’s only 25 °C,” describes Miroslav Kundrata, director of strategic development at the Partnership Foundation. 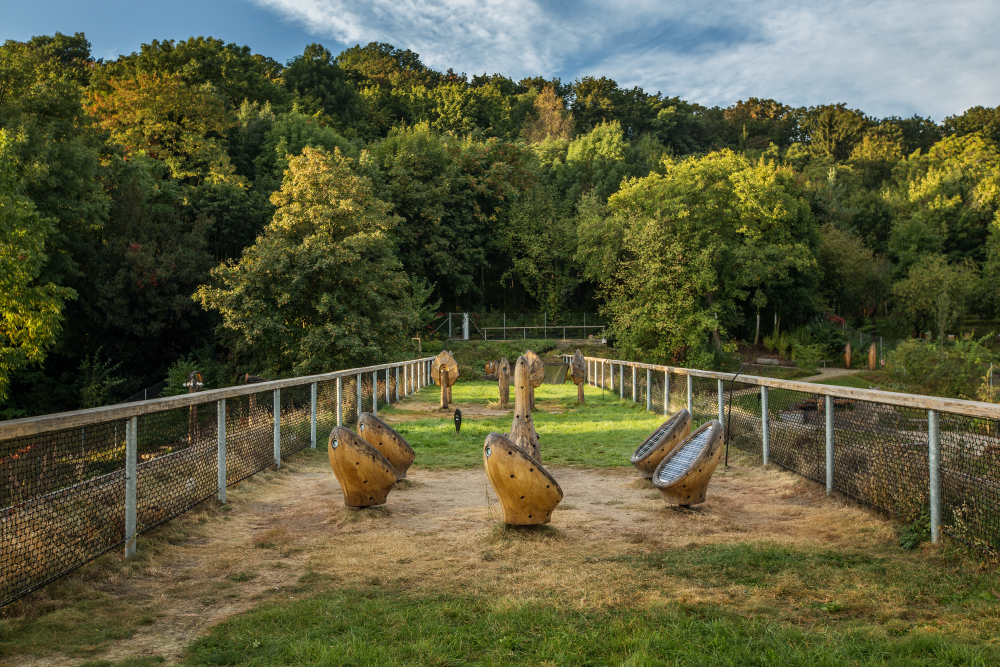 With several green roofs on its premises, all of them measuring and providing data, the Foundation helped create a subsidy program to promote the use of green roofs in Brno. And Brno was the first city in the Czech Republic to start such a program!

A green island in the middle of a city

The extensive system of green areas in Brno is enriched by Open Gardens that are open to general public. In this garden of four natural elements, literally anyone can discover the laws of nature through its interactive educational tools. And a small city farm where monastery gardens used to be shows the cycle of agriculture – the path food takes from soil onto the plate, as the vegetables grown there are served at the adjacent garden bistro.

One of the biggest challenges related to the construction of the gardens was to clear the land. The slopes under the castle were full of dens inhabited by drug users, pickpockets, and the homeless. Instead of simply expelling these people, the Foundation tried to get them involved, so some even helped build it. 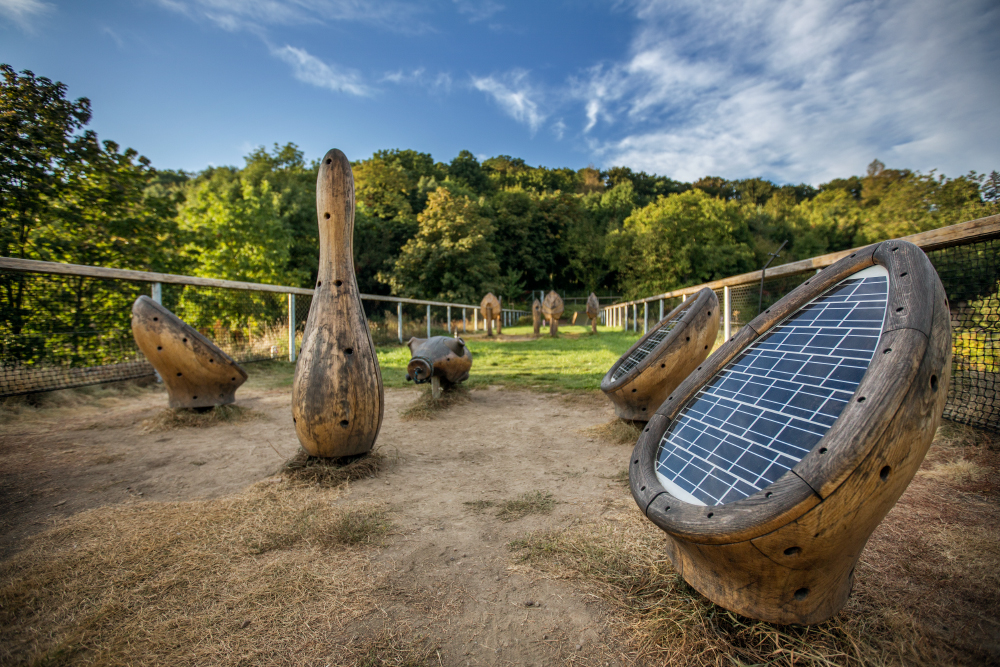 The Open Gardens hold themed courses for the general public or programs for school kids, and anyone is welcome to come enjoy the pleasant atmosphere there, as long as you don’t miss the discreet entrance from the street.

Since the very beginning, both the building and garden have won various prizes, such as Building of the Year, Green Roof of the Year, and Passive House of the Year. So the headquarters of the Partnership Foundations keeps inspiring.