#BRNOREGION
/
News
/
Petra Střelecká: In Brno, sitting in a café is an experience

Petra Střelecká: In Brno, sitting in a café is an experience

Live
Brno is a city of coffee. And top baristas! The baristas from Prague and Brno keep alternating on the first spot in Czech barista competitions. Petra Střelecká is one of them and she reaps awards not only in the Czech Republic, but also abroad. She came 5. at the prestigious Coffee Masters awards and became the most successful woman in making filtered coffee. She was born and studied in Moravia and learned the art of making great coffee in London.

The world of coffee, especially the filtered one, enchanted Petra Střelecká. She has won the competition in making filtered coffee three times already. But she is not the only excellent barista in Brno. Other award-winning baristas make coffee in local cafés.

On top of that, Petra is an excellent cook and since 2014 she has been running with her boyfriend Adam Obrátil a café called Industra Coffee, located on the industrial premises of the Brno freezing plant. She came to Brno two months before opening the café, despite not knowing anyone there. We asked why she and Adam chose Brno of all towns and how they like it today. 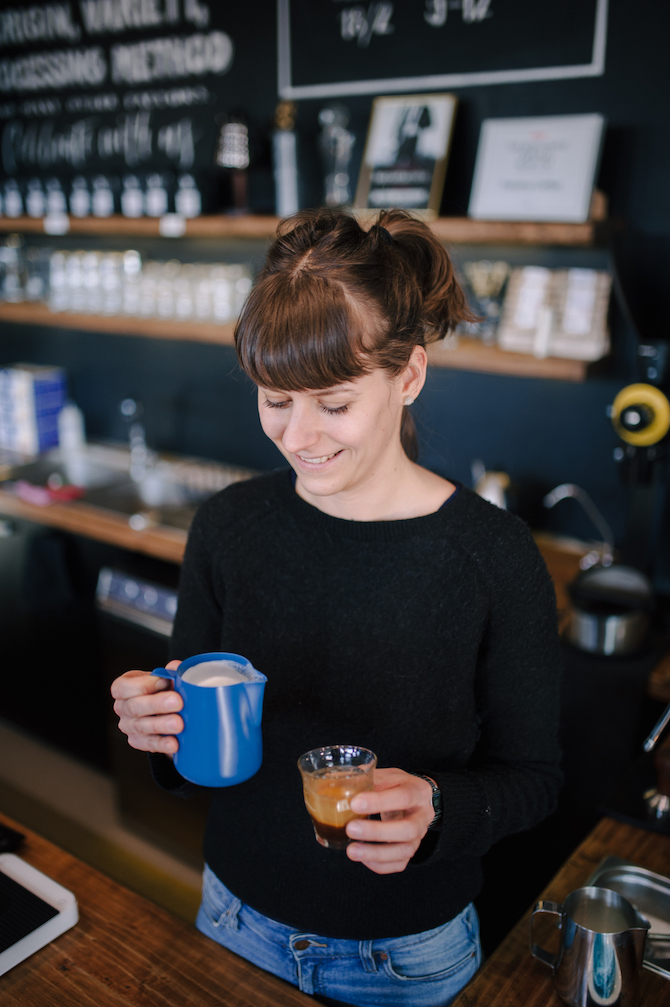 You actually travelled the world and spent a lot of time in Britain, where you first became acquainted with coffee and learned to understand it. Why did you and Adam decide to open a café in Brno?
We wanted to return from London, but not to another metropolis, because we hated the busy business life. But at the same time, we wanted to live in a big city. So Brno was a sort of a compromise. At that time, Ostrava was too small for specialty coffee and Prague was too big. We returned in 2013, and in Brno specialty coffee was then available only in two cafés: Mitté and Coffee Fusion.

You have been in Brno with Industra for four years. How do you like living here?
I completely fell in love with Brno. I like its size. You still feel a bit like you were in a village, but it's the second largest city.

For instance, now we attended the Barista of the Year in Prague and we were staying an hour's drive from the venue. And we said, “Gee, in an hour you could ride from Brno to Blansko”, that’s crazy. So Brno is small compared to Prague and it’s just swell.

It is said that Brno has a strong coffee culture. That was true mainly in the first republic times when cafés were quite different. Is there something typical about Brno coffee culture nowadays? You are well travelled, so I suppose you are in a position to judge.
In my opinion people tend to sit in the cafés, rather than take the coffee with them. Which might mean that sitting in that space is more of an experience than drinking the coffee. That they might not care what kind of coffee they are drinking, and that they just need to spend time in a public space. As opposed to Prague or other big cities abroad where people take coffee as a necessity. They take it with them or they knock it back and they don’t need to sit and sip it for ages.

I feel that in Prague you see more people with plastic cups, and there are espresso bars where one just doesn’t sit at all. But in Brno people sit even in Monogram which is a small espresso bar. Or they stand while drinking it, but they stay there for some time.

This might be a remnant of this Brno first republic café era when people mainly met in cafés, discussed politics, read newspapers… Even though we might ask what kind of coffee they drank at that time.
Wow! If I had a time machine, I would have liked to taste it. 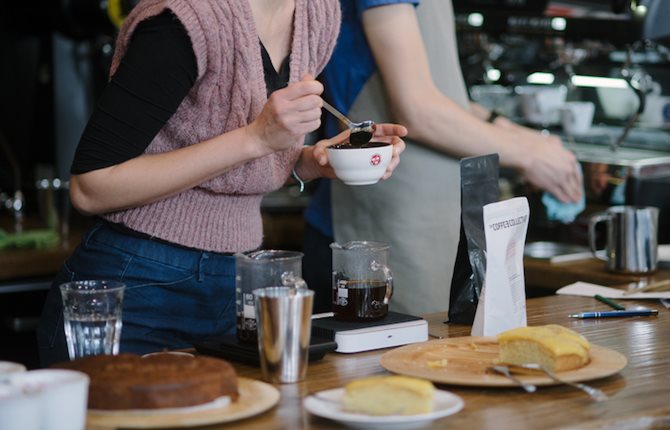 And at that time a café was a name for various establishments – restaurants, bars…
Well, but this still remains a Czech specialty, doesn’t it? Abroad you usually have to have a licence to sell alcohol, and it costs quite a lot of money. Here you have more cafés serving alcohol, mixed drinks and suchlike, and on the other hand less food.

Does the coffee world know #brnoregion at all?
A lot of my friends among foreigners still don’t know that Brno exists at all. Czechia means Prague to them. You see, abroad you’ll usually get a good cup of coffee just in the capital. And it’s a peculiar Czech specialty that here you’ll get good coffee also in Prostějov or Zlín.

People might think that with an infinite supply of caffeine you don’t need to rest at all. But I have an inkling that this might not be the case. What do you do to relax or just to have fun?
I am not very good at relaxing. I am bit hyperactive. But I've always been hyperactive, so it's probably not caused by caffeine. And I am also not able to spend time on my own, so I have to be with someone and do something. Sometimes I go swimming, sometimes ride to my sister who lives in Beroun. I would like to write a book one day.

What would it be about?
About coffee and food, it would be by a coffee cookbook of sorts. I would gather some recipes from our Industra brunches, some cakes etc. But I simply can’t find the time nowadays. 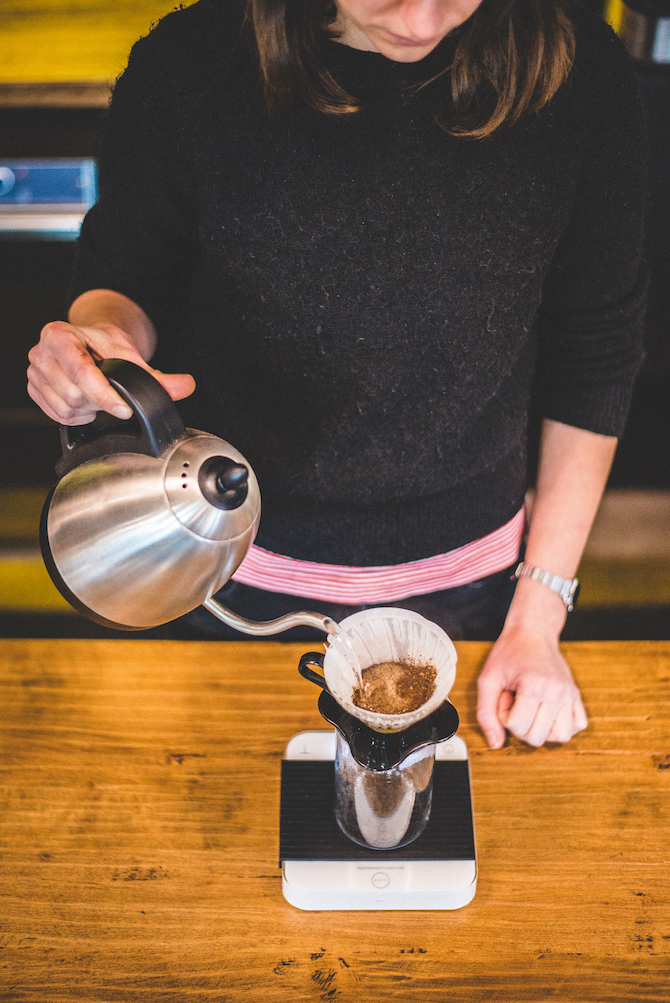 When we have a day off, we head to the centre. We go to Zelňák, buy some vegetables, have a lunch at Bucheck Brno or Lokál, then we'll go for a cup of coffee at Monogram. And we actually spend a lot of time in the centre, or we venture outside Brno.

And where do you go?
We love swimming, so in the summer we keep riding to flooded quarries. To Šošůvka and to Blansko ... In Luleč there is a super quarry. And to Mikulov. And we love the river basin of the Oslava river, a tramping area with a great rock and castle ruins, it is terribly nice there.

As far as cafes are concerned, beyond Brno there is the superb Dvorek in Bořetice or Stříbrský Mill in Ivančice. It has an awesome atmosphere, a very pleasant place. And we make a lot of coffee outside on a camping stove.

How about moving somewhere else? To another city here or abroad? Would it tempt you to try something that doesn’t have something to do with a café?
We have been for a week in London recently and it was an heady experience, but it would be crazy to live there. And I don’t like Prague very much. I have no relationship with it. Brno is great. And it’s warm all the time and it doesn’t rain too much there.

I am really tempted to work abroad, there are a lot more possibilities and a lot more jobs in the coffee business. You might for instance be a taster, just a quality control in a roasting plant. That would be terribly attractive to me, but I cannot sacrifice my life here to that. I wish I could work abroad and live here. That would be the best.