Purple Technology – a company founded on freedom and strong relationships

Do business
A trio of Czech businessmen were looking for a way to do business in a transparent and humane way. And they ended up establishing a company of their own: cheerful and friendly, yet professional.

Already as students at NEWTON University in Brno, David Kašper, Filip Řehoř, and Jakub Nytra started speculating on financial markets, but they didn’t like the way brokerage companies worked.

Having spent several years gaining experience, they were offered a deal by an American forex company. “They wanted us to build a base in Central Europe for them using their capital and support. The problem was that their values didn’t align with ours, so we started wondering if we could become the partner we had been searching for,” says Filip Řehoř, one of the founders and current HR manager at Purple Technology, reminiscing on the path that led to establishing the company.

The three then decided to make use of their experience with financial markets and create their own product and, most importantly, their own technology that would make it easier to do business. And so in 2011, they created the basis of Purple Technology, which today provides technical support for brokers. 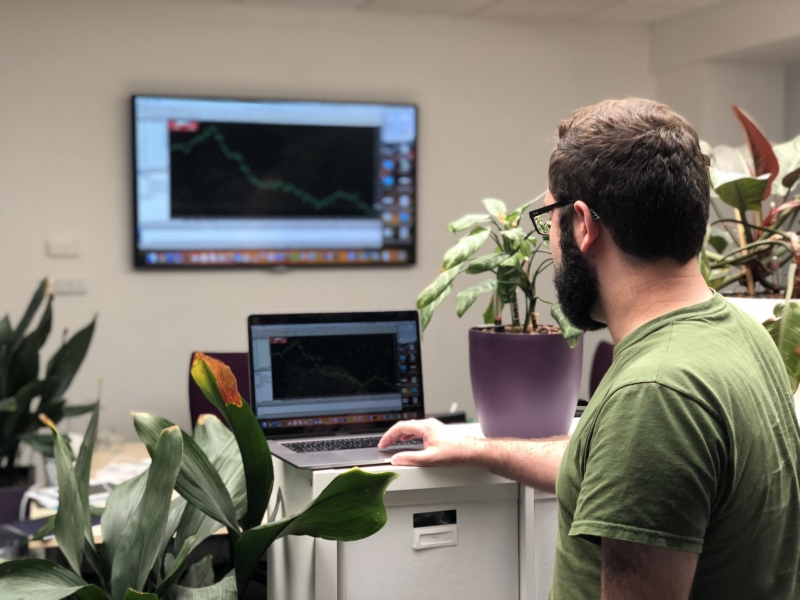 No obstacle is too tough when surrounded by the right people

During its first year, the original team grew from seven to roughly 40 members. However, the enthusiasm brought by the initial rapid growth overshadowed what was really important. “We didn’t achieve our plans and began to run out of money after just a year. Unfortunately, we had to say goodbye to a lot of people we cared for greatly. Eventually, the team dropped to around 20 members,” remembers Filip Řehoř.

And in these difficult times it turned out that the founders of the company had made a great decision to hire only the right people who supported each other and overcame any obstacle together. This crisis, which culminated in 2014, was eventually resolved, and after this stumble the company got back on its feet and stabilized. By 2017, the team had grown to over 50 members. 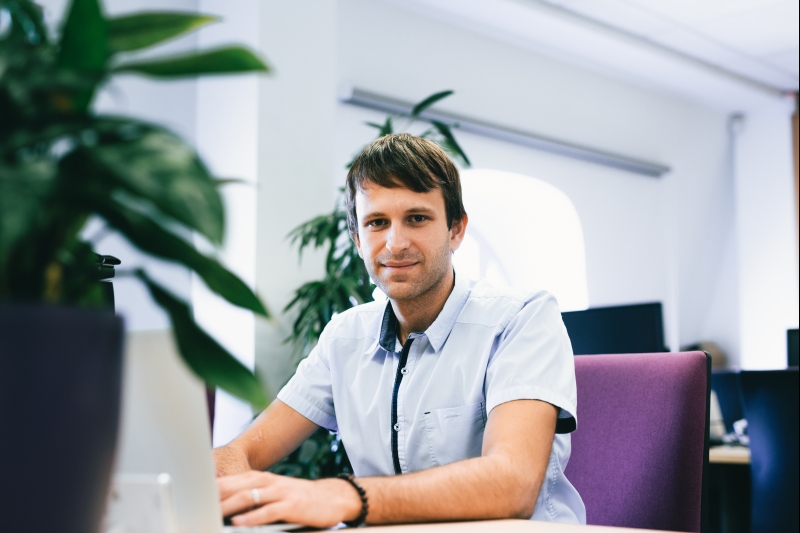 Today, Purple Technology is one of several companies that together make up Purple Holding. The Purple Team, as it’s also called, has been growing, adding the Purple Foundation fund and Purple Ventures investment incubator. Its very heart, though, is Purple Technology and the technological support it provides to all of them.

Since 2018, Purple Foundation has been supporting charities and education right in #brnoregion. “We’ve been focusing mainly on people around us for whom life is harder for some reason, such as the handicapped or oncological patients,” explains Filip Řehoř.

The story of the company going up and down is described in detail to each new member of Purple Technology; they need to know that, just like in people’s lives, there are good and bad times in the life of a company and they need to be ready for it.

You know your assignments, so work wherever you want 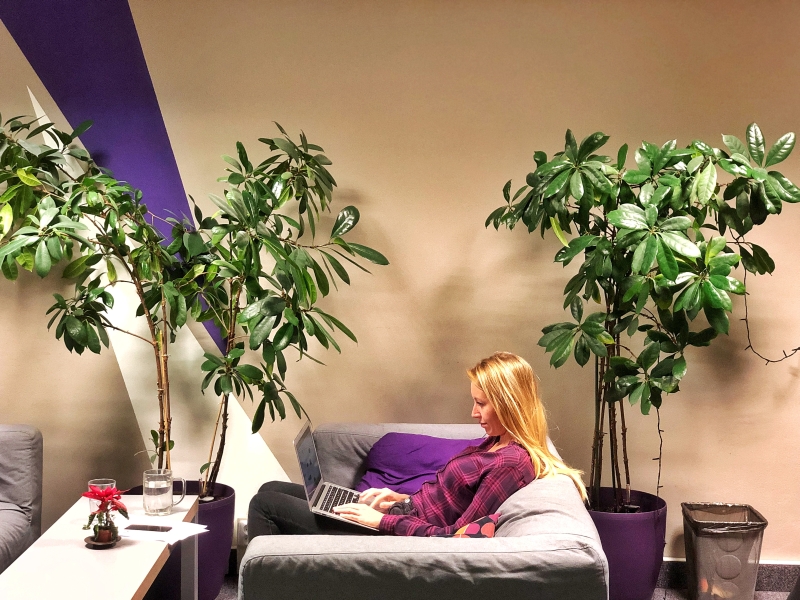 Today, around 70 people work for Purple Technology alone, and twice as many in the entire Purple Group. Even though the company is based in Brno, most of its employees don’t have to actually come to the offices (even though establishing the company in Brno is something Filip Řehoř is very happy about!).

Purple Technology believes that it doesn’t matter where you work as long as you do a good job.

The company allows its people to spend some time in an exotic destination and work from there or to work from simply anywhere for a few months, and every year several of them take advantage of the opportunity. “For a long time now, we’ve been cooperating with a developer  some of us have actually never seen in person. He works at night only and lives in Brussels now, I think,” adds Filip Řehoř.

And how come the entire company is purple? Well, it’s because purple is a colour of emotions and it’s exceptional, strong, cheerful, and friendly. “We’d like our company to be friendly inside as well as outside, open and fair, responsible as well as fun. Simply purple.” 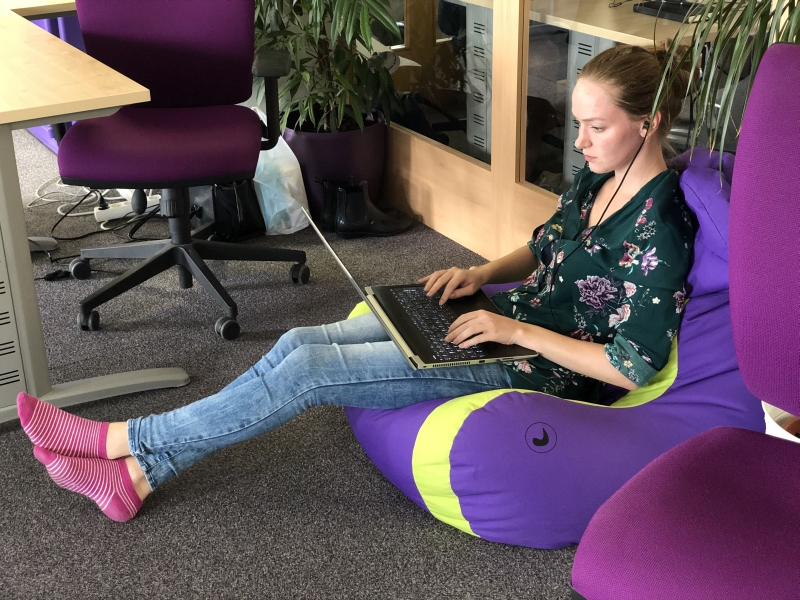 The strong company culture that developed naturally and gradually to include a high level of freedom comes with a lot of responsibility, however. “We studied psychology-oriented management, but I don’t think we followed any handbooks. We were just looking for like-minded people.” Purple Technology first identified its values only after several years; at the time, there were around fifty members on the team and each of them got involved in the process. “We stood up in a circle and asked who we are, why each member was there with us, and how we perceived the company. We gathered some frequently used words, and those became our values,” describes Filip Řehoř.

How about we work from the seacoast for a week?

Some positions require people to be physically present in the office; however, every year the company sees to it that even these people can work outside the office walls, too. Thanks to an idea somebody came up with over a beer years ago, once a year, Purple Team packs up and leaves #brnoregion for the seacoast, usually to Italy or Croatia. “At first we got a small apartment and gave it a try. Then we moved to a big house, then several houses, and now we have to arrange a small village,” laughs Filip Řehoř. This is no easy teambuilding, though! The team works hard and fun activities are reserved for the weekend only.

And without knowing it, these activities gave them valuable experience for remaining effective during the coronavirus quarantine; though the team members cannot see each other, the company has been managing its work more or less as usual.

Good relations are the foundation for good business

Willingness to listen, shared goals, and professional approach as well as readiness to change.

Purple Technology places great importance on how a candidate fits into its team, and only those open to other options and opinions without concentrating only on their own performance make it through the process. “Many candidates were fine to work with, but the teamwork was lacking and there were mutual communication issues. We always try to fix these through feedback, but some people just aren’t willing to change. A professional approach is also important, which is something we underestimated in the beginning. We felt good together, but the results were insufficient. It’s necessary to find the right balance,” explains Filip Řehoř. 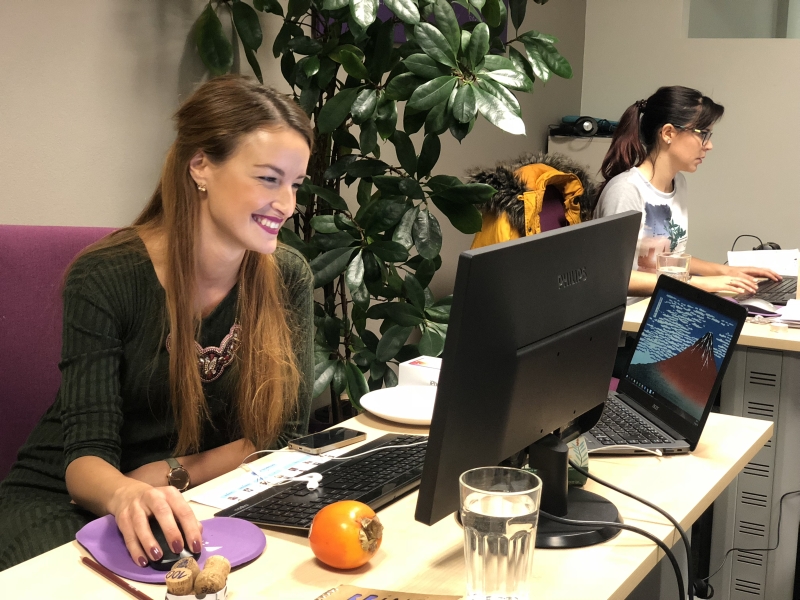 Focusing on good relations and interpersonal communication has helped the company for better partnerships with people outside the company, too, and now Purple Technology is active in over 103 countries all over the world. From the very beginning it was clear that the company would offer its services and products abroad, as the business platform is international. “At the time, this business wasn’t very common in the Czech Republic, so we kept attending networking events abroad. Gradually, we have managed to build various partnerships that keep us strong on individual markets,” remembers Filip Řehoř.

“If you are open and ready to listen and respect everybody, I think you can succeed anywhere,” says Filip Řehoř.

The company is open to other paths it may take in the future. Even though Purple Technology was established mainly for the world of finances and its technologies are used by brokerage companies, it has been enlarging its portfolio with other services such as web development, client support, HR etc.. “We’d like to open more doors to other markets, since the core of our work is supporting companies in various areas” adds Filip Řehoř.

How to run an entire company from home during the coronavirus crisis? An interview with Filip Řehoř that took place in the second week of the quarantine. Turn on the English subtitles on the bottom bar of the YouTube video player.