Do business
In the Brno development centre of Garrett Motion, a leading global producer of turbochargers, developers have been working on a revolutionary new product – an electrified turbocharger to significantly increase engine performance and reduce emissions.

Garrett Motion is a leading global expert in the development, testing, and production of turbochargers for combustion engines. In June 2019, the company was the first to introduce e-turbo – an electrified turbocharger, an accomplishment led by the experts from the R&D centre in Brno.

The development centre in Brno was established in 2006, as part of the Czech branch of Honeywell. In 2018, Garrett Motion spun off of Honeywell to become an independent company and retained the centre for its own purposes. Today, this centre is one of the company’s largest in the world. Over 350 employees from 18 countries work here in test and development laboratories covering an area of 5,000 m2 and in offices of 4,000 m2.

A turbocharger is a type of pump that helps increase the volume of air and fuel flowing into a combustion engine in order to increase its performance. To spin the turbine, it uses the energy of exhaust fumes which would otherwise be wasted. 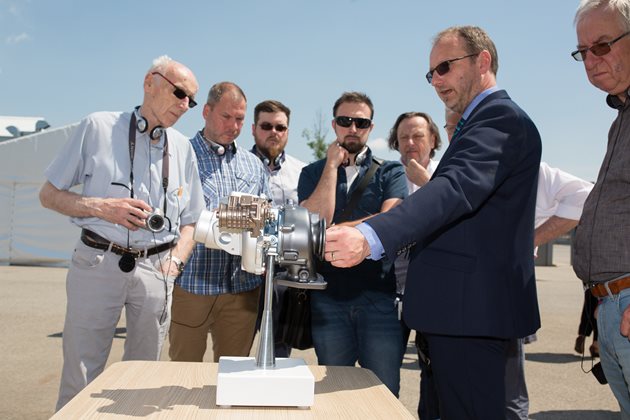 This increased performance allows a vehicle to accelerate very efficiently, which comes in handy especially for race cars. After all, Garrett Motion has been cooperating with the F1 Scuderia Ferrari team for a long time now. Regular passenger cars are also using turbochargers more and more frequently, and Garrett Motion has been a major supplier for most car manufacturers around the world, as well.

A new type of turbo, made by Czech experts

The e-turbo is unique, mainly for its use of an additional electric motor which spins the compressor wheel while the pressure from the exhaust fumes builds to a sufficient level, delivering compressed air to the engine much faster. This allows the driver to achieve the required speed faster after stepping on the gas pedal. With the classic turbocharger, it takes longer to spin the wheel, so there is a short delay. In addition, the e-turbo produces electricity using the excess exhaust fumes and charges the battery in hybrid vehicles.

There are several years of testing and development ahead of Garrett before the technology can be used in the production of passenger cars; even so, this technology is certain to help reduce emissions of CO2 and nitrogen oxides produced by vehicles.