Work
Young chemist Vojtěch Kundrát has already accomplished as much as some do in their entire lives. As a high-school student, he started working with top research groups at universities in Prague as well as Brno. He’s patented several inventions, contributed to the development of a sunscreen oil for albinos in Ghana, and dozens of people in Tanzania now have access to drinking water thanks to his invention. On top of all this, he decided to study art at the Faculty of Fine Arts at BUT.

Kundrát’s activist approach to science drew the attention of Pavel Sterec, the head of Studio of Intermedia, who suggested he apply for a master’s program at the Faculty of Fine Arts (FFA). While in the lab, this young scientist plays with nuclear fuel, and his first final art piece was a video showing an explosion of a cross made of brass, steel, and cinder, referring to Robert Oppenheimer.

How did your first final exams at the Studio of Intermedia go?
Good, I got a C, so I passed. It was demanding, but also fun.

How did you get to the Faculty of Fine Arts? What were you looking for there?
Well, I was looking for another layer in my life. Actually, I wasn’t even looking, but I sort of found the door to Narnia that you either enter or spend the rest of your life regretting that you didn’t. And the problem is that there’s another door further on, and another, and I don’t know if I should open them or how to find a border between the two worlds. I’ve found some great, fun people there – incredibly interesting and expressive people, which makes me feel good. That’s where you can talk with people about various topics even outside chemistry. 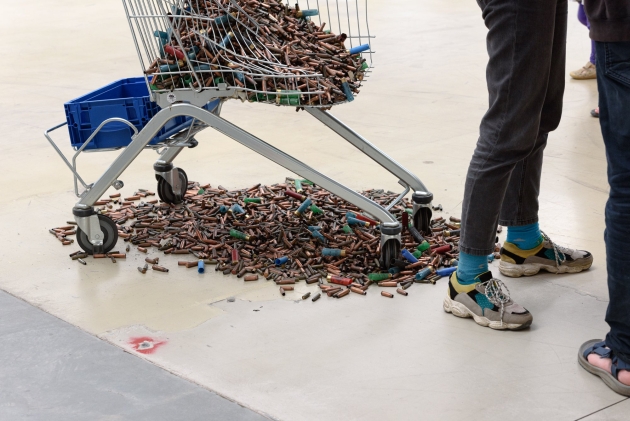 Vojtěch Kundrát's art piece was a part of the group exhibition Sand in the Gears in PLATO Ostrava. Photo: Matěj Doležel, PLATO

What would you say the difference is between working in science and arts?
I think it’s ultimately the same. I see chemistry as a box of Legos; you have something you’d like to achieve, or at least some theoretical goal or direction. And you have to invest your energy into it, either chemical or your own energy. And then you either achieve it or you don’t, or it may do thousands of things you don’t expect.

In terms of mindset, I love one of our studio seminars at FFA called “Open Form”. It’s more or less a method for discovering how to unlearn things. It may look like a children’s game, for example playing with cubes made of wood. But it’s a team activity, that’s what’s important. On the other hand, any scientific activity, even if done in a team, is never a team thing. You work in a group, but only rarely do people in science bond. Don’t get me wrong, there’s a great group of people in the lab, but it’s not as intensive as in the studio. There may be several reasons: in the studio, there are more girls, and – mainly – the Open Form brings people together, as if they grew up together in a kindergarten. As a side effect, you start to see things differently, realize the mechanisms of your behaviour and thinking, and then you can decide whether they are worth keeping. This is very important for scientific thinking. For example, in chemistry classes from high school onwards, everything is presented as truth. This is how it is and has to be. Most facts are often true and are difficult to disprove. The downside is that this makes your thinking rather rigid. Once I managed to destroy this, or at least to realize it, my ideas got better and fresher. And I enjoy it more.

At the Materials Research Centre at BUT, Vojtěch Kundrát contributed to getting several exceptional technologies patented. In cooperation with professor Ivana Márová, he invented a special thread which lets some substances through but absorbs others. These threads may be used to produce a special material for face masks or even wound dressings. Another patented invention was a nanofibre filter which kills bacteria in water by the billions per millilitre. This specially modified textile is folded into a bag that the dirty water is then poured into. To test his nanofilter himself, Kundrát went to Mpanga, Tanzania, where the Ifakara Association from Brno is based. In cooperation with priest Jan Kotík, they’d like to better educate the locals so that they can ensure the quality of their drinking water on their own. 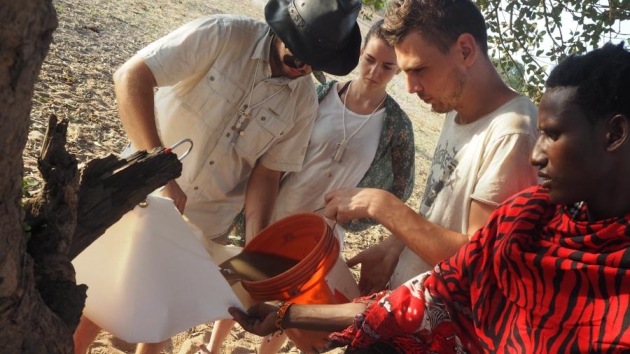 Do you think science is a competitive discipline?
It’s not competitive here, which feels great. We are very free and my excellent boss never says “Do this or that now”. Such an approach would kill me, and I could never work like that. Given the level of freedom in our lab, there’s no competitiveness when compared to the rest of the world where people are often pressed hard to publish their results. I think we’ve reached a turning point and people are starting to realize that a hundred thousand articles a month based on some calculations and weird experiments make no sense at all. There is competitiveness here on two levels – on the natural, normal one, and then on an artificial that is imposed by the outdated system. Fortunately, I feel insulated from that, thanks to my excellent work group and the university, so I see only the first type of competitiveness here.

How did you get to Brno?
I was originally working on my students’ professional activities at the chemistry high school in Prague, but then I came across a lab in Brno where professor Damborský was working on protein engineering, so I started my second students’ professional activity there. This was an exceptional experience, as I joined an excellent research group. Being only 18 years old, I learned first-hand how a team deals with very demanding and extremely technical science. And I’ve been in Brno ever since.

Has Brno won your heart over?
Brno is Brno, and especially the hanging around Old Brno, doing nothing, is an irreplaceable benefit. And I discovered the essence of Brno only at FFA. Before, Brno was more about my profession, but gradually I discovered the beauty of its various shady pubs, the bizarre ones. You notice them during your very first visit to the city. You can very easily lose your way here, even though the city makes total sense. Suddenly, you just have no idea where you are. And that’s what happens downtown as well, coming across something like black holes here and there. An indescribable charm. And FFA is a very special island in the middle of all this. I guess nothing would really happen if it didn’t exist, but I just think it’d be a huge shame. For me, it’s the pulsating, rotten heart of Brno. 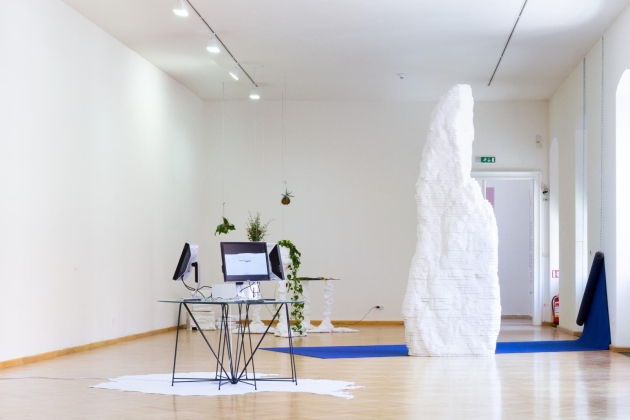 The exhibition of final works by graduates from the Faculty of Fine Arts in 2019, Photo: Polina Davydenko

When the coronavirus crisis reached the Czech Republic at the beginning of March 2020, it was the students of the Studio of Intermedia who gathered a large number of volunteers to start sewing the face masks that medical staff and social workers were lacking. While his fellow students got dozens of people and sewing machines involved, Vojtěch Kundrát initiated the production of protective face masks made of nanofibre and, together, they succeeded in distributing over 3 thousand highly efficient nanomasks, 10 thousand separate nanofilters, and thousands of textile face masks for organizations in need. 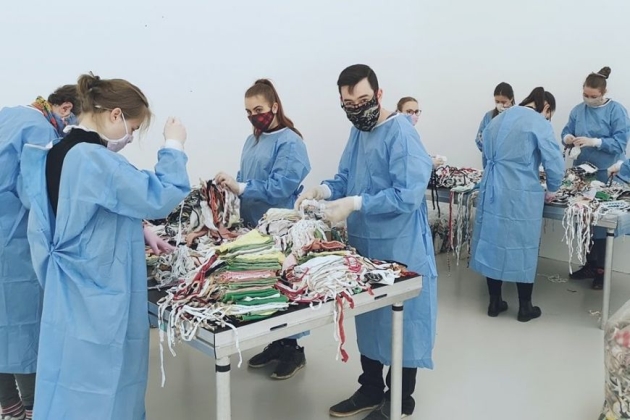 How did people at the arts faculty react when they learnt you were coming from a totally different discipline?
They were very inclusive, actually. I’d really love to interconnect these two worlds, and I’ve been working on that with Pavel Sterec, head of the studio, and professor Márová from the Faculty of Chemistry at BUT. We’d like to bring together two work groups, which sounds to me like a very current and European idea. At BUT, there’s a set of data that is very hard to evaluate. When a scientist, say a biochemist or biologist, gets their hands on it, they notice some patterns there thanks to their education. Well, their minds are set up that way. And this can be a drawback. It would be amazing to show that data to 10 incredibly creative artists who see it absolutely independently. To show the data to them, look at it together and see what is happening. It would be great to see something like this happen. And bring in a psychologist to explore the mechanism. If this ever happens, it could lead to some exceptional results.

What are you working on in the lab right now?
I’m working on forms of nuclear fuel, which I’ve been enjoying for a long time now, as I’ve discovered an undescribed place in the map. I do electrospinning, which is a method of producing nanofibre; perhaps one of the most interesting and best methods – it looks simple but in fact is pretty complex and dynamic. I found out that nobody has ever produced nanofibre from uranium oxide or thorium oxide. And I’ve managed to do that, so professor Pinkas and I have published our results and it’s great. 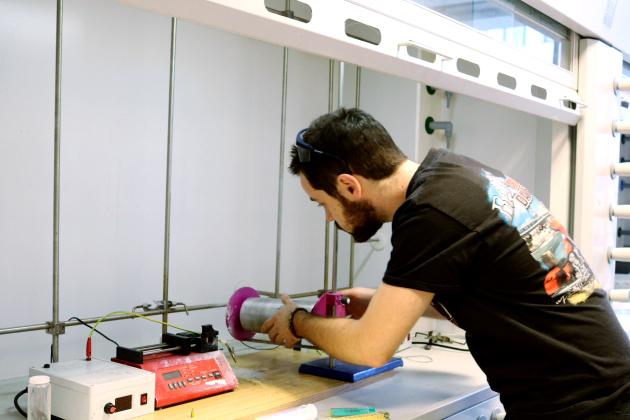 At this stage, is it possible to think about putting your knowledge to some use?
It’s rather complicated. However, in relation to the accident in Fukushima, the scientists researching nuclear fuel start to realize related issues. The whole world has been abandoning nuclear power, as its risks are huge and notorious, and after the Fukushima accident a new research trend called “accident tolerant fuels” emerged. When the reactor runs out of cooling liquid, these should reduce the mess. Various chemical forms have been researched, and this is a very complex topic. The question is whether this will be of any use, as old yet fully functional power plants begin to get shut down. And here I am, playing with something not described yet, and nobody even knows whether it may be helpful some day. Theoretically, though, this could be added to the nuclear fuel to make it release gas more easily upon splitting. These are just dreams now, though.

Already as a high-school student, Vojtěch Kundrát participated in the research of a new method of alcohol synthesis. He’s also a co-author of several patents and has contributed to the development of a sunscreen oil for albinos in Africa. These days he is doing research at the Faculty of Science at Masaryk University as well as at the Faculty of Chemistry at BUT. What’s more, he is working to unite the worlds of science and contemporary art, most recently through a lecture on material chemistry at the PLATO Centre of Contemporary Art in Ostrava.