Live
Find the capital of South Moravia on a map? Easy. But where can you find out which part of the city people feel best in or where the largest number people live at the same place? That’s what an interactive map is for!

Data available to everyone

Brno Urban Grid is a simple online application which displays spatial data on Brno and its surroundings. It’s not a complex analytical system but an easy-to-understand way to help urbanists, journalists and politicians visualize rather complex phenomena directly in an interactive map. One cell in the grid refers to an area of 250 x 250 metres. Individual cells then display data such as a number of people living there or floor space of small shops. Whether you’re wondering which places are suitable to open a new shop at or in which part of Brno most car accidents happen, Brno Urban Grid offers updated data anybody can work with. 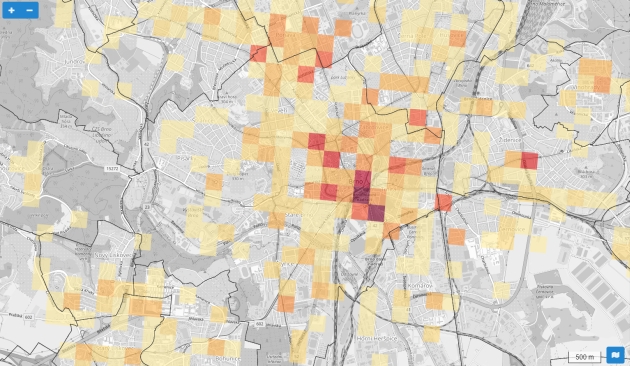 The application was developed by Altimapo, a spin-off business of geographers from the Faculty of Science at Masaryk University in Brno. Cartographers, IT specialists, and social geographers together came up with a way to simplify work for all those who need to plan things with respect to public spaces.

Of course, statistical information can never be enough to get an idea of what living in Brno is like; the best way is to experience the city on your own. If you like precise data, though, Brno has its own map of quality of life. Using dynamically-calculated indexes that keep changing based on updated information, you can select criteria important for you: quality of environment, social status, safety, services or options to relax. The interactive map may help those searching for the ideal neighbourhood to live in or the city representatives to resolve some local problems.

What we feel in Brno

While it’s possible to calculate quality of life, at least partially, we in #brnoregion are interested in the stories and feelings hidden behind the abstract numbers. That’s why Brno asked its own inhabitants which places they like and want to preserve as well as which places they don’t like and would want to change.

The answer is the Brno map of emotions available for everybody. Simply select which emotions you’re interested in and the map will display not only the opinions of the people of Brno, but also clusters of positive as well as negative emotions. Thanks to the most frequent emotions, you can find out which places are the most troublesome or, on the other hand, popular in Brno. (Obviously, the most popular place is the greenest one – the largest city park Lužánky.)

However, the people of Brno can do much more than just say they like the green areas in the city. Another application illustrating the life in this heterogeneous city is a map of smells, in which the locals describe good and bad smells they encounter on their way through the city. Anybody can add a pin there and describe what they smelled, how strong it was, and what it may be from.

Originally a students’ project, it helped show problematic city locations. The city authorities may not notice these, but they are crucial to the way everybody experiences the city. The map for example drew attention to a problem with waste disposal close to the Polárka Theatre and confirmed that people very much like the smell of roasted nuts in the pedestrian underpass under the Main Station.