Do business
A secondary school leaving certificate, or a university degree is a great achievement for most students. They ploughed through their studies, they sailed through the tests, they are champions. Hooray!

Not all of the fresh graduates realize that the diploma is just a beginning. A beginning of a career that will stretch for 80 thousand hours. How many of them know where they really excel, what they want to devote their lives to, what they will enjoy and what will they find fulfilling? Just a fraction of them. That’s why Europeans started to discuss the development of personal talent and entrepreneurial spirit on all school levels. In our region, JIC plays an important role in this kind of education.

According to a Gallup survey, 87 percent of people all over the world do not apply themselves in their jobs. They perform their tasks, but their minds wander.

Their company doesn’t matter to them. According to the survey, the situation in Czechia is actually even a bit worse. It turned out that 32 % of Czechs really hate their jobs and 60 % have a lukewarm attitude towards it.

Nine out of ten Czechs spend most of their lives in a job they are not satisfied with which often negatively impacts their personal life. – a Gallup survey

But there is a small share of people, namely 8 percent, who look forward to going to work every morning and feel motivated. How have they achieved that? Could we make this figure grow? Yes, we could. Especially with people who haven’t experienced the world of work – students of secondary schools and universities.

Schools haven’t addressed the future of their students so far

Elementary and secondary schools and universities should teach young generation important competences, develop their personality and prepare them for the world out there. But it seems that it’s much easier to teach according to dusty syllabi and force students to cram for traditional subjects, rather than talk with them about their strengths, about work expectations or about how to prepare themselves for life, once they get their school leaving certificate.

Until now pupils and students could discuss their future course with their parents, with their school career advisor (whose presence is more often than not an exception in Czech schools), or they could try to think of something themselves.

But the situation is slowly changing for the better. The European Union introduced strategy Europe 2020, according to which each primary school student should receive fundamental information on the conduct of business by 2020. However, the aim is not to make all young Europeans businessmen, but rather foster their personal growth, the desire to take an active part in the life of society and to show them that having their own company is one of the options. The year 2020 is practically around the corner, so hurry up.

#brnoregion became involved as the first

While abroad the courses on business thinking are commonplace in schools, in the Czech Republic it’s still something new. #brnoregion adopted this strategy this year as the first one and became a pioneer. By 2020, nine institutions including JIC want to develop entrepreneurial spirit of students of elementary, secondary and vocational colleges. Sixty schools in southern Moravia also promised to take part in this ambitious mission, as a part of the regional KaPoDaV project.

Institutes and schools will try to show students that starting their own business can be an interesting alternative for them. Until now Czech students have been skeptical about having a company of their own. According to the survey of the Association of Small and Medium-Sized Enterprises conducted last year, 82 % of students think that having a job is more secure and comfortable. 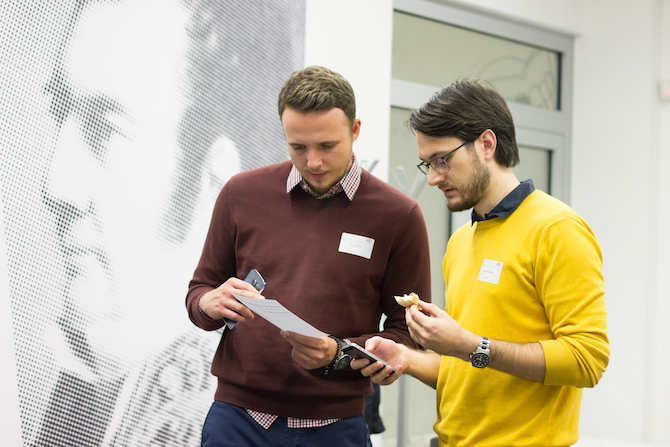 South Moravian Innovation center decided to initiate students into the mysteries of running a business and prepared a tailor-made course called Inspiration towards one’s own company. Pupils and students will walk in businessman’s shoes for a day and will try their first entrepreneurial steps. They will be divided into small teams, work on their own ideas, get feedback and they also hear about inspiring entrepreneurs of their age. JIC lecturers Vojtěch Krmíček and Ivana Chlubná will be their guides in following topics:

In the last two months, 160 young people took part in workshops to find out what they would like to do in the future. They realized that if they have got the desire and energy there isn’t any reason not to try starting one’s company.